The devastating crisis in world financial markets today is very much the result of America’s advocacy for “free market” thinking.  Apparently the belief was that left to itself the free market would make the few filthy rich, sustain the middle class in their position, and help lift the poor by at least giving them hope for upward mobility.  To achieve this so the theory seems to have been the governments of the world must keep their hands off the market and no kinds of restraint and no regulations must be imposed upon the market.

The end of course is the current effort to bailout the free fall Wall Street has caused around the world.  What seems to be missing in this is any discussion of ethics.  What is the morality of profit?  Where is the discussion of the ethics of global free market thinking?   The only ethics seems to be that profit is always the highest good and can therefore never be doubted let alone questioned.  There seems to be no ethics involved, at least according to the politicians who advocate the free market, regarding how much wealth the few CEOs carry away even when everyone else experiences financial failure and crisis.  Third World development will come to the grinding halt of poverty, and millions will suffer not because of the bad decisions they made, but because a few Wall Street executives were not guided by any morality except greed.  To steal a phrase:  if it weren’t for bad morality, they’d have no morality at all.

Millions will suffer because of the greedy decisions of the few; no matter what happens these few will walk away with millions.   And no one will hold them or their cheerleading investors accountable.  It is the free market after all, and accountability would put regulation on it – put on cost on those who profit most from the free market.  And that, in this theory, is unthinkable, as are the consequences of said greed.

And why do political parties, especially those which love to make character and ethics a major issue, never want to address the ethics of the economy?  Why is it that when it comes to money – to greed aka “profits” – Americans do not want to hear about morality?

Are we to believe that there is no correction to the free market system and that we must simply all enjoy prosperity when it comes and then bail out the wealthy when they fail the rest of us?   Are we to believe that regulation is always bad, and bailout is the only response to failure?  Between unregulated and totally regulated, there sure seems to be plenty of gradations to be used.

And strangest of all, how is the American government going to pay for this huge bail out?   By borrowing more money.   By vastly increasing the national debt we will bail out Wall Street – we will pay for the billions they supposedly were creating for the country’s wealth but were not in reality.  Especially we will be paying for the incredibly greedy salaries of CEOs and those who caused the debacle in the first place.  We will borrow hundreds of millions of dollars so that a few can continue to get wealthier, and we will ask nothing of them.  I suppose one could say that the US government indeed is Christian – they are going to give expecting nothing in return.

Maybe the “free” in the Free Market is going to be the hundreds of millions the US government will have to give to keep the system afloat.  Fortunately, all they have to do is print more – nobody has to pay for that, right?  If ethics don’t apply, you can do anything you want in economics, can’t you?  The free market won’t cost anybody anything, it is all about profit.  What could go wrong when profit is your guiding virtue?

Besides, its an election year, they won’t let anything really bad happen.  Or are there forces we really don’t control?  Perhaps the free in “free market” has really become “free” of our control – we attained what we had never imagined!

See also my The Profit of War,  “In God we Trust”: Especially When Money is our God, If Greed is Profit, the Cause of Problems Disappears.

I began reading E.O. Wilson‘s THE CREATION: AN APPEAL TO SAVE LIFE ON EARTH.   Wilson, a Harvard 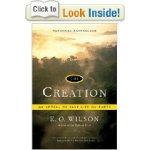 Professor who has stirred up plenty of controversy in the scientific community with his ideas in sociobiology, is a secular humanist who addresses his book to fundamentalist Christians in an appeal that they cooperate with scientists in taking a passionate concern for the environment.

“Some postmodern philosophers, convinced that truth is relative and dependent only on a person’s worldview, argue that there is no such objective entity as Nature.  It is, they say, a false dichotomy that has arisen in some cultures and not in other cultures.  I am willing to entertain such a belief, for a few minutes anyway, but I have crossed too many sharp boundaries between natural and humanized ecosystems to doubt the objectivity of Nature.”

In this statement Wilson, a former Baptist himself, gets as philosophically close to the world view of believers as he is going to get – he believes in objective truth and opposes the notions of postmodernism. Wilson probably would not accept the prediction of some that science and Buddhism have a future together but that more doctrinal religions like Christianity will disappear over time, unable to compete in the world of intellectual discourse (see my Science vs Religion or Truth is truth?).  Wilson takes a fairly dogmatic stand that there is such a thing as objectivity when it comes to truth.  However, he does not accept a theological truth or objectivity, but believes the only truth worth pursuing is that which is empirical.  He is not very sympathetic to religion:

“There are still thinkers around the world, some in commanding political and religious  positions, who wish to base moral law on the sacred scripture of Iron Age desert kingdoms while using high technology to conduct tribal wars-of course with the presumed blessing of their respective tribal gods.”

Ouch!  While I would say to have such a low opinion of Christians he seems unfamiliar with the ideals and spiritual writings of the best in Christian history, nevertheless he certainly has witnessed plenty of examples of modern American leaders who seem to fit his description and whose opinions prove his point.

Wilson is somewhat famous for claiming that eventually genes will be found which determine much of human behavior, including genes that govern whether a person is a believer in God or not.  Despite his thoughts about genetics, science and secular humanism, he offers some warnings about where genetic research is headed.

“Beyond the curing of obvious hereditary diseases such as multiple sclerosis and sickle-cell anemia, by gene substitution, the human genome will be modified only at risk.  It is far better to work with human nature as it is, by changing our social institutions and moral precepts to get a more nearly optimal fit to our genes, than it would be to tinker with something that took eons of trial and error to create.”

In other words, in his thinking humans should pay a lot more attention to the human impact on the world  environment rather than trying genetically to change humans to better survive in the world we are creating by our lifestyles and environmental disregard.  This is a main theme of his book.  He is hoping to interest religious people in environmental issues – to be concerned about the things we intentionally do that have unintended consequences on the environment.   As Wilson sees it, we should be concerned about the tiniest insect populations which are part of this earth.

“People need insects to survive, but insects do not need us.  If all humankind were to disappear tomorrow, it is unlikely that a single insect species would go extinct, except three forms of human body and head lice…. But if insects were to vanish, the terrestrial environment would soon collapse into chaos.”

He describes why this is so as the ecosystem of planet earth relies on insects for pollination, for food, for giving us flowering plants as food, for renewing the soil, for decomposing dying things.  Humans surviving in a world without insects, so Wilson says, “would offer prayers for the return of weeds and bugs.”

Those very pesky pests – weeds and bugs – which we wonder why God ever created, Wilson says would be sorely missed in a world in which humans manage to damage the environment to the point it cannot sustain insect life.  The smallest creatures play a significant role for the existence of Christians and for the world we know.   That idea was not lost in the screenplay of H. G. Wells’ THE WAR OF THE WORLDS and what finally defeated the invading Martians.

“The end came swiftly all over the world, their machines stopped and fell.  After all that men could do had failed, the Martians were destroyed and humanity saved – by the littlest things which God in His wisdom had put upon this earth.”

“Light does not fail because men have blinded themselves; it remains, with its own properties, while the blinded are plunged in darkness through their own fault… Therefore, all who revolt from the Father’s light, and who transgress the law of liberty, have removed themselves through their own fault, since they were created free and self-determining.”   (St. Irenaeus of Lyons)

This applies to spiritual truth, to the light of Christ as well.  The Light does not fail even if everyone chooses blindness.   It is possible to have eyes and not see as the scriptures warn.  Truth is not diminished because people will not see it, embrace it and proclaim it.  It is no less true just because no one wishes to know it.