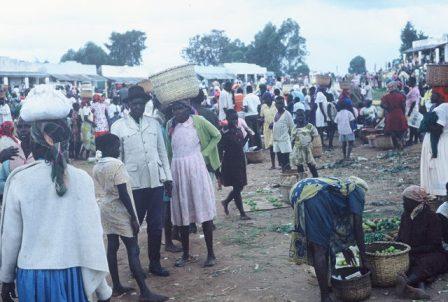 Thirty years ago, 1978, I was in Kenya as a missionary for the Greek Orthodox Church.   While I was there I did learn some things about the native culture. The photo at the left is a scene from market day in the Rift Valley in Western Kenya, among the Kalenjin people.   In my journal for September 24, I have written the following, which describes the story of creation from the Kalenjin Tribe’s ancient religion:

“Their story of creation says that in the beginning God created a man, named Chi (his name translates as “a person”).  God then gave Chi a wife, and they had many children.  Due to a famine, they had to move to a new country (they traveled East) and went into the land of giants.  There, one man a day was eaten by the giants.   There was a young boy who was given a dream by the God behind the Sun (the Sun was God’s eye looking upon His people).  As a result of this dream the boy led the people out of the giant’s country.  When the giants realized their slaves had escaped, they became angry and pursued the people.  As  the people were following the boy realized the giants were chasing them, they began to complain to the boy that they were better off in the land of the giants – because the giants only ate one man a day, but now the giants were angry and they were going to destroy all the people, so everyone was going to suffer.  The fleeing people came to a river and were trapped between the giants and the river.  The boy spoke to the river as God had directed him, “O river of my ancestors spread apart.”  The river obeyed and all the people passed through.  But when the giants reached the river, the boy called the river to close and the giants were drowned.

I of course do not know whether the man who told us this story was indeed retelling the tradition of his people, or whether their own story had been modified over time due to hearing the story of salvation of the Christian missionaries.   Assuming that he told us an accurate account of their ancient religious beliefs, one can see how they were indeed a people prepared to hear the story of God’s salvation as told in the Bible.