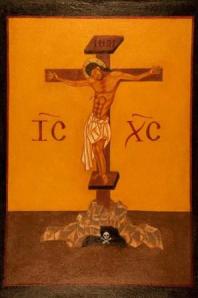 Christ Himself is our peace, who has made both one, and has broken down the middle wall of separation, having abolished in His flesh the enmity, that is, the law of commandments contained in ordinances, so as to create in Himself one new man from the two, thus making peace, and that He might reconcile them both to God in one body through the cross, thereby putting to death the enmity. And He came and preached peace to you who were afar off and to those who were near. For through Him we both have access by one Spirit to the Father.   (Ephesians 2:14-22)

St. Paul’s argument in Chapter 2 of his Epistle to the Ephesians is that the coming of the Messiah has meant the end to the distinction between Jew and Gentiles, between the Nation of Israel and the nations of the world.  God has overcome all human divisions through the cosmic salvation brought about in Jesus the Word of God become flesh.  Even “the middle wall of separation” – that wall which prevented the Gentiles from entering into the Jerusalem Temple sanctuary which was by Jewish custom reserved for male Jews only – has been broken down, making it possible for all people of the world to have access to God and to salvation in the Church.

Strangely in Orthodox history, the Church eventually reconstructs a dividing wall not only between believers and non-believers, but also between Orthodox and non-Orthodox Christians, and then even between the ordained Orthodox and the non-ordained.    For ultimately the iconostasis is built as a re-established dividing wall of separation to keep all but the elite away from the altar; this, despite the clear references throughout the New Testament to the dividing walls being ended by Christ (see for example Matthew 27:51 or Hebrews 8:1-6, 9:6-11, 10:19-25).

George Fedotov in his THE RUSSIAN RELIGIOUS MIND writes critically of what happened to Christianity in its early history because of its success in converting the Roman Empire to the faith:

“The ancient Church was the heir of the cult of both the Synagogue and the Hellenistic mysteries. … The mysteries were destined for the few, for the initiates only.  Yet since the whole Empire belonged to the initiates, the mysteries were brought forth to the masses.   The danger of this vulgarization was met by a retroactive process.  The Church now tried to protect and to hide the mysteries again, particularly the Eucharist, which is the core of the Church life and its cult.  Hence the tendency, and afterward the rule of pronouncing secretly the prayers of consecration as well as many others; the development of the altar railing into the high Iconostasis, completely hiding the sanctuary from the lay people.  Hence also, under the use of late neoplatonic theurgical language, the new verbal vestment of mysteries, which made them sublime and inaccessible, even dangerous for the unworthy…”  (p. 52, Volume 3 of his collected works).

The solid and high Iconostasis was the rebuilding of the middle wall torn down by Christ.  Though some in the Orthodox world would defend it saying the wall merely holds the Icons which are windows into heaven.  But it would be strange to erect a solid wall where none existed just to place a window in it.   And we are allowed to look into heaven but not into the altar?

We are baptized into Christ – this is the fulfillment of the theological notion that God became human so that humans might become God.  We are united to God in the mysteries of Baptism and the Eucharist, but then separated from one another by a wall which seems to declare that for some the mystery of Baptism was not all that effective and leaves them still on the other side – the wrong side – of a wall which Christ supposedly had torn down according to St. Paul.

The oneness of the Body of Christ though is preserved in the words of the Liturgy in which we continue to pray in the “we” and “us.”   Let us lift up our hearts, let us give thanks to the Lord.   All the baptized faithful participate together in

the elevation and consecration of the gifts.    “For I am sure that neither death, nor life, nor angels, nor principalities, nor things present, nor things to come, nor powers, nor height, nor depth, nor anything else in all creation, will be able to separate us from the love of God in Christ Jesus our Lord”   (Romans 8:38-39 RSV).

Now, therefore, you are no longer strangers and foreigners, but fellow citizens with the saints and members of the household of God, having been built on the foundation of the apostles and prophets, Jesus Christ Himself  being the chief corner stone, in whom the whole building, being joined together, grows into a holy temple in the Lord, in whom you also are being built together for a dwelling place of God in the Spirit.