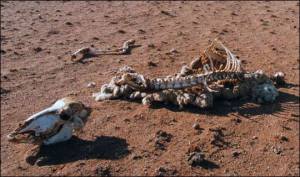 “…away from the presence of the Lord…”   Is this possible?  Has humanity fallen so far that a person can actually move somewhere away from God’s presence?    It may be that this is what Cain had in mind when he lured Abel into the field – he hoped it would be away even from the presence of the Lord. Is there such a place on earth that is in fact away from God’s presence?  Literally speaking the text does not make sense though we can understand its figurative sense.  But theologically speaking we profess a belief in the Holy Spirit which is “everywhere present and fills all things” so there is no place which would be away from God’s presence.  Psalm 139:7-10 bears witness that there is nowhere in the cosmos that we can go where God is not present: “Whither shall I go from your Spirit? Or whither shall I flee from your presence?  If I ascend to heaven, you are there! If I make my bed in Sheol, you are there!  If I take the wings of the morning and dwell in the uttermost parts of the sea, even there your hand shall lead me, and your right hand shall hold me.”   The created world is by definition “not God” but literally speaking there is nowhere on earth that is away from the presence of the Lord.

The threat of being cast away from God’s presence because of our own failures as Christians even if figurative in language is still a spiritual reality.  The story of Cain is a lesson for us; it is not just a sad story about a man who lived long ago.  In the Divine Liturgy the priest prays during the Cherubic Hymn,  “Do not turn Your face from me nor cast me out from among Your children…”  Just because we pray (even for priests!) does not mean that God must accept our prayer.   It is possible that we can approach God in an unworthy manner, with an unclean heart, and God can cast us out as He did Cain.  Remember Cain’s problems started with God not accepting his offering.  Cain’s being sent away from God’s presence began not with sin, but with Cain’s offering not being acceptable to God.  This led to Cain’s murderous sin; it wasn’t murder that led to God rejecting Cain’s offering.   The prayers of the Orthodox Church constantly call for our own humility in approaching God – calling us first to humbly repent and to cast all evil from our heart before we even begin to pray.   Before the Lord’s Prayer in the Divine Liturgy, the priest says, “And make us worthy, O master, that with boldness and without condemnation we may dare to call upon You, the heavenly God as Father and to say…”  Modern sensibilities which assume God must listen to our prayers find such groveling prayers to be offensive to human dignity.  But the modern attitude where God has no choice when it comes to listening to prayers, deprive God of His sovereignty.  Such an attitude reduces God to servitude – He is nothing more than our servant who must respond to our every beck and call.  Orthodox spirituality does give full respect to God as our Lord, and recognizes that because of our sinfulness and human limitations we are not just servants of God, but frequently unworthy servants who have no sway over the Master.  Rather all we can do is approach Him with the greatest reverence, acknowledging our sins, and begging Him to consider our requests.    We recognize the reality that our prayers are that of feeble sinners.  We do not want to provoke God’s goodness by presuming He has to listen to us.  We always approach God acknowledging our sinfulness and begging His forgiveness and mercy.  This is also why the Orthodox so rely on the prayers of the Theotokos and God’s saints on our behalf.  Even if God will not listen to our pleas, perhaps He will listen to the saints which He loves as He has found their prayers worthy.

Note well, though Cain is a murderer God never threatened to punish him eternally in hell (such a concept does not exist in the Genesis account) nor does God threaten Cain with the death penalty.  Cain’s punishment is banishment from the rest of his family.  Only, as more people come to exist on the earth does God determine a greater need for “law” and various forms of punishment to influence or control the humans.  When law fails is the next level of threat an eternity in hell?

“land of Nod”    The fact that lands beyond those of the current humans already have names suggests there are in fact other people on earth not accounted for by the Genesis tracing of humanity through the descendents of Adam.

“east of Eden”    In Genesis 2:8, Eden itself is said to be “in the East” and now Cain is moving east of Eden (the east).  The east is where the sunrises, yet it appears that Cain and his descendents are not people of the light.