I have been reading Garry Wills’ BOMB POWER: THE MODERN PRESIDENCY AND THE NATIONAL SECURITY STATE.   The book is an interesting and accessible read and, sadly for me, verifies things I have feared have been happening in American politics, especially in the executive branch of our government.  I find it all quite depressing (A feeling exacerbated by the book I’m currently reading, TRUE ENOUGH, in which dirty politics is revealed as appealing to ideologically inclined Americans who aren’t interested if something is true, just so it is “true enough” to be believable to them).  Basically Wills asserts that as a result of creating the atom bomb the US government has since WWII continued on a path of ever increasing demands for secrecy regarding the military and creating a virtual continual war mentality in the country.  World War II ended, but America never returned to a peace time frame of mind.  The fear of the Russians/communists created a perpetual war time mentality with increasing demands for money, secrecy and national security.  America entered a new kind of “peace” – “a peace to be based on a weapon.”   Fortress America arose out of the mentality that the only way to guarantee our “peace” in the world was to be prepared to use nuclear weapons of mass destruction in the face of any threat.  He calls this “a permanent war in peace.” 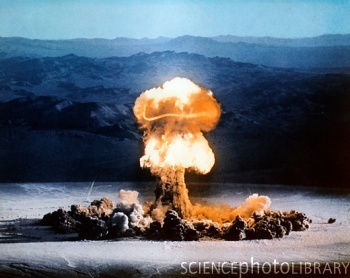 “This book has a basic thesis, that the Bomb altered our subsequent history down to its deepest constitutional roots.  It redefined the presidency, as in all respects America’s ‘Commander in Chief’ (a term that took on a new and unconstitutional meaning in this period).  It fostered an anxiety of continuing crisis, so that the society was pervasively militarized.  It redefined the government as a National Security State, with an apparatus of secrecy and executive control.”

Wills’ thesis certainly corresponds to something I thought obvious in a couple of recent elections where the notion of the President being the leader of the free world was totally subordinated to the notion that the President is almost exclusively framed as supreme Commander in Chief of the Armed forces.  For some voters this appears to be exactly the only issue they are voting on when choosing a president despite what the Constitution might say about the chief executive’s office.  As Wills puts it some Americans saddle the presidency with a singular purpose, “Being the champion of ‘the free world’ meant maintaining nuclear superiority, not actually advancing freedom in the countries that cooperated with us.”   America in its foreign policy is quite accepting of totalitarian regimes as long as these regimes advance our military interests.   What the U.S. military or covert agencies are doing in foreign lands is also often kept a secret from the American public.

Secrecy and deception have become standard operating procedure in the “national security state” which the  U.S. has become.   This totally defines what it means to live in a free country such as the U.S.: we passively accept increasing powers and secrecy in the presidency, including surveillance of foes and citizens alike, and the use of secret sites for secret torture to be carried out for dealing with foes and gathering information.

The bottom line is that this militarization of the civilian leader of our nation makes its seem that the American President’s real power is in possessing “the bomb,” not in being leader of the free world, nor in being the head of the richest country on earth, nor the economically most powerful.   It is “the bomb” which comes to define the presidency and the United States as it approaches the world, not freedom nor free enterprise.   (See also Defense Secretary Robert Gates concern regarding “The Creeping Militarization of U.S. Foreign Policy”)

3 thoughts on “Super Power: Is the ‘Bomb’ America’s True or Only Strength?”