This is the 2nd and concluding blog in a series reflecting on Professor Steven Goldman’s lecture series, GREAT SCIENTIFIC IDEAS THAT CHANGED THE WORLD.      The first blog is Great Scientific Ideas (Part 1)

5)     “Quantum mechanics imputes randomness, probability and uncertainty to elementary physical  processes and to the elementary structure of physical reality.  It redefines causality, space, time, matter, energy, the nature of scientific law and explanation, and the relationship between mind and world.”

The days of fixed materialistic determinism come to an end in the science of physics.    This is actually good news for believers, though it presents a new set of challenges as well.   Certainly traditional Christian theology has understood one of the basic differences between Creator and creation is that creation is mutable and subject to the laws of physics including notions of randomness, probability and uncertainty.  The new discoveries of science are in fact reaffirming what Christian thinkers believed centuries ago, but has sometimes been forgotten by biblical literalists who think that God and theology must conform to scientific fact just as much as scientific fact must conform to the claims of the bible.

Computing as an informational science follows the same mathematical rules as all science.  Goldman’s entire discussion on how information and communication theory led to amazing discoveries and inventions in computer engineering and techno-science is amazing.    It wasn’t the case that micro-chip engineering was preceding and leading information theory into figuring out how to use the computer for word and thought processing, but the other way around:  information theory began to advance and conceive information in new ways which allowed it to be related to mathematical formulae which in turn could be recorded on micro-chips which in turn demanded more and more powerful chips. 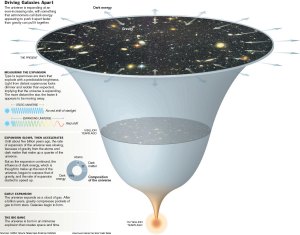 7)     “Moreover, black holes can be understood as structures that preserve information …. which suggests that not only black holes but the entire Universe is an information structure.”  (and basically  all “physical objects are ‘reduced’ to information representatives”)

DNA, how atoms function and the relationship even of subatomic particles has been shown to be information systems at work storing information which can be retrieved and used later to even help the immaterial world to self organize.  God’s hand can be discovered in the universe.  DNA for example is another scripture recording the creative acts of God since He called time and space into existence.

8)     “The spontaneous emergence of order in nature challenges the idea of entropy in thermodynamics…  with an available source of energy, systems can self-organize out of available, unordered ingredients and spontaneously generate stable structures that can themselves evolve over time into more complex structures.”   …    “The most marvelous expression of self-organization is the formation of the human embryo, which spontaneously emerges out of non-linear interactions.”

There is a complex relationship between the inanimate and the animate in creation.   Certainly science has shown how physics can be written in terms of mathematical equations and relationships, and chemistry is now understood as a form of physics, and so in recent times biology too can be explained in terms of physics in genetics.    When God the Creator created that which is “not god” (namely the entire empirical universe) he brought the empirical world into relationship with the spiritual and the divine.  That the inanimate universe can with an energy source “spontaneously” cause order to emerge in the universe is for believers another sign of the hand of God at work in our universe. The spiritual and physical worlds are not meant to be in opposition to each other, but rather in creation and in the incarnation, these worlds are brought together by God in order to lift up humanity to Himself.