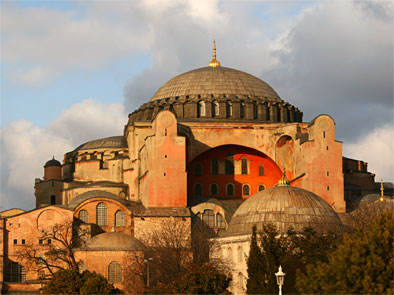 There are many features which characterize Byzantine Christianity.  The Christians of the Empire did see themselves as receiving the Faith of the apostles and being responsible for passing it on to future generations.   They saw themselves as the natural inheritors of the faith of the martyrs – those many faithful who had been executed by the Roman state.   They believed themselves to be the people of God, the true Israel, those who had believed God’s promises and saw those promises fulfilled in the Messiah Jesus. 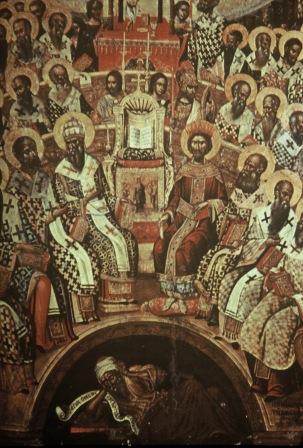 One of the first things that happened to Christianity in the Constantinian world is that Constantine demanded from the Christians unity in faith.   He had after all envisioned Christianity as being able to unite his empire in one religion.  But the Christians were a diverse group and had numerous divisions in terms of beliefs.  Constantine wanted them to have at least some basic agreement in the tenets of faith.  And so Constantine summoned what became known as the First Ecumenical Council (325 CE) in the city of Nicea to get the Christians to adopt a creedal statement that would enumerate the basic required beliefs of the Church which all Christians could accept.   The summoning of a council of bishops (and the first council was dominated by bishops who spoke Greek) was to set a pattern for how the imperial Church would deal with problematic issues.   Greek bishops tended to believe in the equality of all bishops and they accepted notions of hierarchy which saw the bishops as the authentic  spiritual leaders of Christianity.   The Councils (ultimately Orthodoxy came to recognize Seven Ecumenical Councils as being authoritative over the entire Church, the First held in 325 CE, the last in 787 CE, all of them dominated by Greek speaking bishops) formed in the Greek Christian consciousness a sense of conciliarity within the leadership of the Church.   Councils also came to be viewed as the highest authority within the Church, ruling over the bishops themselves, at least once the bishops accepted the Council’s decisions.

Next:   The Age of the Ecumenical Councils

4 thoughts on “Orthodoxy in the World: The Byzantine Period”