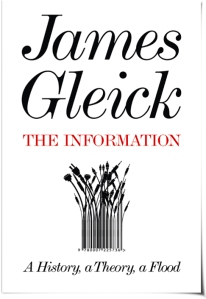 I did like James Gleick’s book THE INFORMATION: A HISTORY, A THEORY, A FLOOD.   It’s all about something essential to my own life, but which I hardly understand at all:  information.   I hope to share in this Blog Series some things I learned, and also to share information about what I don’t understand.   Much of this latter part has to do with the science of how voluminous information is converted mathematically to signs and symbols which can then be readily transferred to distant points.  Thus huge files – photographs I send over the internet – can be converted to a format that enables their wireless transfer from one destination to another.

As Gleick says, it is probably nigh unto impossible for us to understand what it is to live in a pre-literate culture.  Our lives are so shaped by words and the logic which words allow, even for the illiterate among us.  Even pre-schooled three-year olds recognize the signs and symbols of their favorite fast food restaurant.

Symbols additionally allow increasingly abstract thinking, and greater analysis of the data and ideas they represent.

“Logic might be imagined to exist independent of writing—syllogisms can be spoken as well as written—but it did not.  Speech is too fleeting to allow for analysis.  Logic descended from the written word…   Only with writing does narrative structure come to embody sustained rational argument.”  (pp 37-38)

As Gleick points out in pre-literate culture, the spoken word has no permanency.  It dissipates quickly and can’t be analyzed very well.  The meaning of the spoken word is also not completely fixed and though ideas can be shared with those who speak the same language, between languages there is even more difficulties in communication.   Words are understood in context; the spoken word has no text to contextualize.

John’s Gospel introduces the idea of information with: “In the beginning was the word…”  (John 1:1).  Yet at that beginning point spelling did not exist, an alphabet did not exist, so the Word is nothing like what we moderns imagine, shaped by our literate culture.  “The Word” in that context of “the beginning” denotes something completely different than we imagine: more idea or reason than printed letters.  That original “Word” did not have form – letters, a beginning letter and a last letter with other letters between in a particular order.  It had no beginning or end, it was a divine spoken word: a Word to be vocalized and heard, more like music to the ear than a score upon a page.

God said, “Let there be light…”   (Genesis 1:3), and the miracle occurs that the spoken word – a sound produces light which is something to be seen.   Words still do that in our minds when we hear someone say something, we understand because ideas and images form in our minds from what we hear.   They do become “incarnate” in the synapses of our brain, but still they are not printed letters.

The Word was eventually translated into writing, the Scriptures.  Now the message became less ethereal and more material.  Writing became the first “artificial memory” which enabled words and meaning to be studied and observed and restructured.   The ancients worried about this.

‘For this invention will produce forgetfulness in the minds of those who learn to use it, because they will not practice their memory.  Their trust in writing, produced by external characters which are no part of themselves, will discourage the use of their own memory within them.  You have invented an elixir not of memory, but of reminding; and you offer your pupils the appearance of wisdom, not true wisdom.’”  (p30)

Next:  The Word, The Information and the Bit (II)

6 thoughts on “The Word, The Information and the Bit (I)”