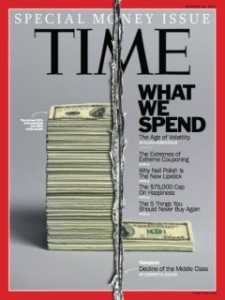 The 10 October 2011 issue of TIME had a few statistical graphs giving a financial picture of our lives today.   The statistical graphs I found most interesting were the ones dealing with how we Americans allocated our personal budgets through the last 60 years.  The statistics were measuring the “Percentage of Total Personal Consumption Spending.”

22% of Personal Consumption Spending on Food,

3% on financial services and insurance.

5% on financial services and insurance.

7% on financial services and insurance,

8% on financial services and insurance,

Of course the stats don’t give us a clear picture as to why these changes.  Obviously the percent of our personal consumption spending on food and clothes has declined significantly.  The stats don’t say whether that is because the actual price of these goods has fallen, or if we choose to spend less on these items, or if we simply have more disposable income and so we can devote a smaller portion of our budget to food and clothes.

What stands out in my mind is the soaring cost of health care.  As a percentage of total personal consumption spending, health care spending jumped from 3% in 1950, to 7% in 1970, to 13% in 1990, to 16% in 2010.  So while I hear some Americans claim the American health care industry is the best in the world, it appears we will have to add the caveat “for those who can afford it.”    In difficult financial times how many Americans cannot afford to give 16% of their spending to health care.  Health care is rapidly approaching taking up as much of our spending as housing.   Maybe we value our health that much, or maybe we will all have to start choosing between having a home or being able to participate in the American health care system.

Our diseases will be treated but we will have to cope with the “dis-ease” that we can not afford both health care and having a home.

While I know many Americans hate government involvement in things like health care, I wonder has the insurance industry or the health care industry put forth any viable plans which do not involve government and which lower the costs of health care to make them more affordable to and more accessible to more/all Americans?  If health care is driven by wall street, the only concern is going to be profit.  Can the industry create a system whose real concerns are the American people themselves?   Are people more than simply consumers of health care?  How can we create within capitalism a system in which the benefit of the people is the concern and in which this doesn’t end up having to be what government advocates for?   The people often feel when compared to the big money of the health care industry their only hope for an advocate is big government.  What do the health care and insurance industries have to change/do to make the health of the American people the obvious focus of their concern – the real bottom line?

“…The church building is there for us, to help us achieve encounter with God. It is we, not God, who need the building. God is everywhere present, filling all things.” (Archimandrite Meletios Webber, Bread & Water, Wine & Oil, pg. 93)