Humans throughout history have tried to comprehend why evil and social chaos occur.   I found it interesting to compare the thought of the Jewish work The Wisdom of Solomon (scholars place the writing 100 -10BC)  with the Hindu writing the Bhagavad Gita (which scholars place ca 200BC – 200AD).   They are thus roughly contemporary writings though from different parts of the world and with different religious assumptions. 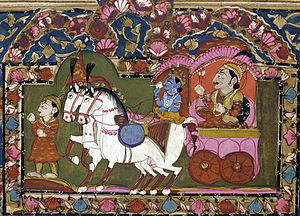 The Bhagavad Gita offers at one point an explanation of what is the cause of evil and the disintegration of society.   It blames the intermixture of castes – intermarrying of men and women of different castes which thus leads to the total destruction of family and society.  It is a vicious cycle dragging families and society to hell.

The Wisdom of Solomon on the other hand blames the ruination of society on idolatry: the worship of false gods.

“Everything is mixed together: Blood and murder, theft and treachery, depravity, unfaithfulness, tumult, perjury,  confusion over what is good, ingratitude, corruption of family, breakup of marriages, disorder, adultery, and debauchery.  For the worship of idols not to be named is the beginning, cause, and end of every evil.”   (Wisdom of Solomon 14:25-27)

The chaos that results in both works is similarly portrayed – the breakdown of family life which leads to all manners of evil.  Both would say the problem is a breakdown in traditional religious values which results in total social dysfunction and destruction.

Roman Philosopher Cicero (10b-43BC) writing in a similar time period wrote, “In all probability, disappearance of piety toward the gods will entail the disappearance of loyalty and social union among men as well, and of justice itself, the queen of all the virtues.”  Once piety towards the gods disappeared he said, “life soon become a welter of disorder and confusion.”

We could also compare these teachings with another that comes from about the same time:  the Gospel of Jesus Christ.   Jesus taught:

“For it is from within, from the human heart, that evil intentions come: fornication, theft, murder, adultery, avarice, wickedness, deceit, licentiousness, envy, slander, pride, folly.  All these evil things come from within, and they defile a person.”  (Mark 7:21-23)

Christ places the source of evil as the human heart – not in society, nor in Satan, but in each human being.

If we had no other texts from the these religions to consider but what is mentioned above we might conclude that in Hinduism the antidote to evil is the adherence to traditional cultural norms:  it is adhering to traditional cultural values which will preserve society from evil.    In the Jewish text, there is also a call to faithfulness to tradition with a clear notion that false religion must be cast out in order to maintain the purity of society and its goodness.  In Christ, while there certainly is an appeal to Jewish tradition in terms of what is considered sinful and thus detrimental, He places the purification of society in the heart of each person.  It is through personal repentance of sins that evil is defeated.