You can read the full text of the Synod’s letter at Locum Tenens Appointed.

Also available is the Holy Synod’s Statement Regarding the Resignation.

Our Midwest Diocesan Bishop, Matthias, has sent a letter to the priests of the Diocese confirming the resignation of Metropolitan Jonah as Primate of the Orthodox Church in America which was accepted on July 7th by the OCA’s Synod of Bishops and is considered effective as of today, July 9th.   His Grace asked that we priests “extend to the faithful calm assurances of faith in the Church and Her Helmsman, our Lord and Savior.”

According to Bishop Matthias the Synod will have a teleconference meeting today to continue discussion on the resignation.   There is also planned at some point a teleconference call between the Synod of Bishops and the Metropolitan council to discuss the current situation.   Bishop Matthias directs us to the OCA’s webpage to watch for further information as it becomes available.  He also asks for our prayers.

See also The OCA’s Synod Statement on the Resignation. 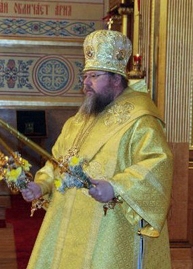 Metropolitan Jonah was elected as the Primate of the OCA in 2008 at the All American Council in Pittsburgh with a tremendous amount of hope and good will in what was hailed in the press as the “Miracle in Pittsburgh.”  It was thought his election signaled a new page in the OCA’s history – leaving behind a financial scandal that had rocked the church, and the election of the first convert to the office of Primate of the OCA.

According to the OCA webpage, the Synod of Bishops will meet in a teleconference on Monday, July 9, to discuss the tendered resignation.  The web page says a further announcement will follow that meeting.

As with any unusual change in leadership, there will be talk and discussion about the “why?s” of this situation.  Why is he resigning?  Why now?  etc.

Prior to the OCA’s own official statement, Rod Dreher had already posted on his blog an announcement that Metropolitan Jonah had been “ousted.”  Dreher calls the Synod of Bishops “ravenous wolves” and “wild dogs” but offers no explanation for his derogatory comments.  That the Metropolitan and Synod had been in contention over issues has been well known.  The Synod itself is not known for making rapid decisions.  And since there were well known disputes between the Synod and the Metropolitan, and between the staff and the Metropolitan, and between the Metropolitan Council and the Metropolitan, none of this occurs without context.  What the Synod will choose to reveal about its decision making remains to be seen.  But Dreher’s characterization of the on-going events seem pretty one-sided, and seem to lack that context which has been an on-going tussle within the OCA’s administration.  The OCA’s Synod has in fact demonstrated a rather patient attitude with the administrative problems and seemed to have been trying to help him with his office recognizing the truthfulness of the Metropolitan’s own statement that he was personality-wise ill suited for the position of Primate.

My prayers go out to all the Members of the OCA’s Synod (of which Metropolitan Jonah is one member) who again have to wrestle with such tumultuous events.

See also a few comments by Bishop Matthias of the Diocese of the Midwest  on this news at The Resignation of Metropolitan Jonah and OCA Appoints Archbishop Nathaniel as Locum Tenens.

See also the OCA Synod’s Statement on the Resignation.