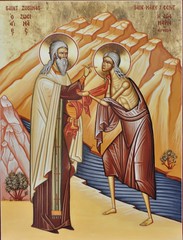 “Amma Sarah said, ‘If I prayed God that all people should approve of my conduct, I should find myself a penitent at the door of each one, but I shall rather pray that my heart may be pure toward all.’ Amma Sarah did not seek the approval of others; likewise, she remained nonjudgmental in her attitude toward others and their own journeys toward God. As in any other time in church history, there were strong personalities in Sarah’s day, but she did not follow fads. She sought to remain true to her own simple path toward God.” (Laura Swan, The Forgotten Desert Mothers, pg. 39)

On the 3rd Sunday after Pascha, the Sunday of the Myrrhbearing Women, the Epistle/Apostolos reading is Acts 6:1-7, which introduces us to St. Stephen who is among the first deacons chosen in the church, and will become the first martyr of Christianity.  Didymus the Blind  (d. 398AD) comments on St. Stephen the Protomartyr: 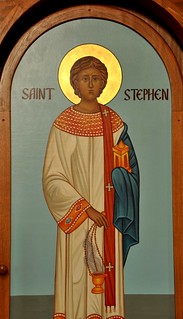 “After all, Stephen, that first witness to the truth and a man worthy of his name, was said to be filled with wisdom and the Holy Spirit (Acts 6.3) – consequently, wisdom is implied when the Holy Spirit abides in him – as the Scripture says: And the Apostles chose Stephen, a man filled with faith and the Holy Spirit (Acts 6.5). And after some other passages: But Stephen, a man filled with grace and power, was doing great signs and wonders among the people (Acts. 6.8). And still concerning the same: And they were not able to withstand the wisdom and Spirit that was speaking in him (Acts 6.10). For the blessed man was filled with the Holy Spirit, and was made a participant in the faith which comes from the Holy Spirit, in accordance with the passage: But to another, faith by the same name Spirit (1 Cor. 12.9). Having grace and power according to the same Spirit, he did great signs and wonders among the people. Indeed, he also abounded in those gifts according to the same Spirit which are called the graces of healing and power. 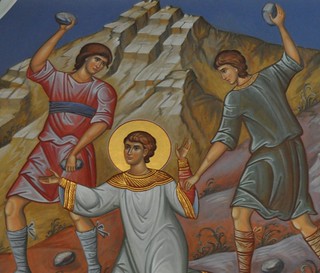 For in the first epistle of the Apostle Paul to the Corinthians these are numbered among the gifts of God in the Spirit and according to the Spirit. But Stephen overflowed with divine grace to such an extent that none of his opponents and those disputing with him were able to withstand the wisdom and Spirit who spoke in him. For he was wise according to the Lord and the Holy Spirit. This is why Jesus clearly proclaimed to his disciples: Whenever you are brought to authorities and powers and councils and synagogues, do not be anxious regarding what you ought to say or how you should speak at that time. For words of wisdom shall be given to you by the Holy Spirit, which not even those very experienced in disputations will be able to oppose.”     (Works on the Spirit, pp. 155-156)