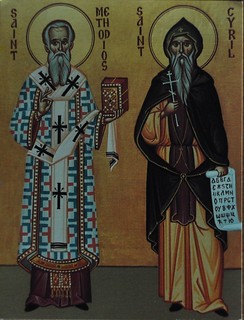 “The most famous of all Byzantine missionaries are the brothers Saint Cyril (826-869) and Saint Methodius (c. 815-885). Both had served the imperial government prior to undertaking their missionary work to the Slavs of Moravia in 862. Their suitability for the mission lay in part with their knowledge of the Slavic language, gained while growing up in Thessalonika, an area with a large Slavic population. Beyond that, they were clearly gifted men. Both had been able administrators and Cyril had served as a professor of philosophy in the Imperial Academy. Both had served on other imperial missions in which part of the task was a defense of the Christian faith. It was only natural that these brothers were chosen to teach and establish the faith in Moravia. Before they had even departed on their mission, Cyril constructed a Slavonic script and commenced the translation of the Bible into Slavonic. Their work in Moravia was thus grounded in the language of the people, a key point in Orthodox mission policy.” (James J. Stamoolis, Eastern Orthodox Mission Theology Today, p 20)