“In the beginning, God created the heaven and the earth.” 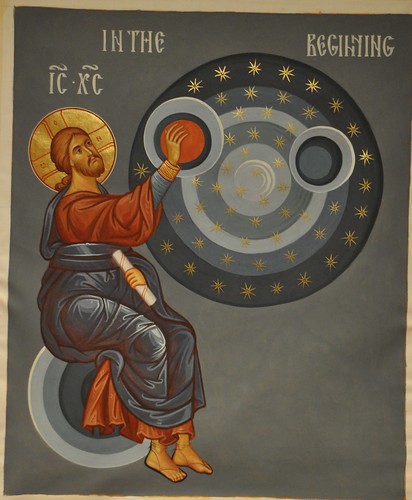 St. Basil (see my blog series St. Basil: creation and Science) in his comments touches upon something that today is a problem for modern cosmology: the beginning of the universe.   The evidence science has at this point strongly suggests the universe has been expanding from the instant it came into existence.   The rapid expansion of the universe at its beginning is accounted for by “inflationary theory.”    Brian Greene writing in the May 2014 issue of The Smithsonian, Listening to the Big Bang, says:

“The case for inflationary theory has now grown strong, capping a century of upheaval in cosmology. Now, not only do we know the universe is expanding, not only do we have a credible proposal for what ignited the expansion, we’re detecting the imprint of quantum processes that tickled space during that fiery first fraction of a second.”

It is, however, that instant of the Big Bang – “before” space or time exist – that creates also for us and for science a mystery.  That instant is beyond the reach of any scientific inquiry or mathematics as it remains outside our knowable universe.  The beginning is not yet the thing as St. Basil noted 1600 years ago.  So can we ever really know the beginning of our universe?

The Book of Genesis attributes the  creation of the world, the beginning of space and time, to the Creator God.   Genesis is not offering the modern mathematics and physics to explain what happened.  Genesis offers us a notion that there is a Being who exists outside of space and time, or contrariwise, a Being in whom space and time come to exist, and Who is the cause of existence itself.  For believers in God as Creator, the Big Bang is the greatest evidence of the mystery of God.  The very fact that inflationary theory when traced backwards leads an instant of the greatest mystery for science, is for believers evidence of God and the beginning of the revelation of the Creator.

“The Big Bang is often described as the modern scientific theory of creation, the mathematical answer to Genesis. But this notion obscures an essential fallacy: The Big Bang theory does not tell us how the universe began. It tells us how the universe evolved, beginning a tiny fraction of a second after it all started. As the rewound cosmic film approaches the first frame, the mathematics breaks down, closing the lens just as the creation event is about to fill the screen. And so, when it comes to explaining the bang itself—the primordial push that must have set the universe headlong on its expansionary course—the Big Bang theory is silent.”

In the 4th Century AD, Basil the Great taught:  the beginning of the universe is not yet the universe.  The beginning, he philosophized,  is  “immeasurable and indivisible.” His philosophical thinking, the science of his day, is quite compatible with the science of our day.   Sixteen hundred years later we still scientifically know nothing more about that beginning, other than to affirm that it happened.  Today we have the math and science which supports inflationary theory, but all it can do is take us to that instant of the beginning, to that mystery of space and time beginning to exist.

In his Smithsonian article, Brian Greene writes about how scientific thinking was changed and the idea of the Big Bang gained favor as the evidence came in to support the theory:

“But calculating deep into the night of December 6, 1979, (Physicist Alan) Guth took the work in a different direction. He realized that not only did the equations show that general relativity plugged an essential gap in Newtonian gravity—providing gravity’s mechanism—they also revealed that gravity could behave in unexpected ways. According to Newton (and everyday experience) gravity is an attractive force that pulls one object toward another. The equations were showing that in Einstein’s formulation, gravity could also be repulsive.

The gravity of familiar objects, such as the Sun, Earth and Moon, is surely attractive. But the math showed that a different source, not a clump of matter but instead energy embodied in a field uniformly filling a region, would generate a gravitational force that would push outward. And ferociously so. A region a mere billionth of a billionth of a billionth of a centimeter across, filled with the appropriate energy field—called the inflaton field—would be wrenched apart by the powerful repulsive gravity, potentially stretching to as large as the observable universe in a fraction of a second.

And that would rightly be called a big bang.”

“Inflation’s explanatory package is so remarkable, and its most natural predictions so spectacularly aligned with observation, that it all seems almost too beautiful to be wrong”

And it is precisely at that juncture – where beauty and truth meet – that we encounter God.