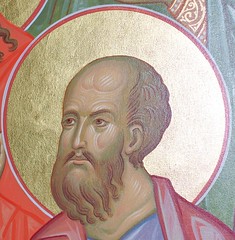 For when you were slaves of sin, you were free in regard to righteousness. What fruit did you have then in the things of which you are now ashamed? For the end of those things is death. But now having been set free from sin, and having become slaves of God, you have your fruit to holiness, and the end, everlasting life. For the wages of sin is death, but the gift of God is eternal life in Christ Jesus our Lord.

St. Gregory Palamas (d. 1359AD) comments on why humans die but does not blame original sin, but rather says we each sin which is why we each die.   If we had in fact inherited sin, we might be able to blame God for our own deaths.  But St. Gregory says the fault is our own, and we cannot blame Adam or God.

“Why does He who is everywhere present and nowhere absent desert the soul? Because the soul, which has been created by Him with free will, and cannot be constrained, first abandons Him or her own volition. We ourselves are to blame for God’s abandonment of us, not God our Creator. We, alas, are the cause of our own death, voluntarily forsaking the Master, who created us to live, who is always with us and Himself gives us life. Like those who shut their eyes when the sun is at its height, we wilfully deprive ourselves of the light, while it is present and shines down upon us. Setting aside the guidance that brings life, and thus deserting God and distancing ourselves on purpose from life, we accepted Satan’s deadly counsel, and by this means invited him in to live in us. As he is a dead spirit, who first forsook God Himself, he caused us to die. I am still referring to death in respect of the soul, which, once it has been separated from God, ‘is dead’, according to Paul, ‘while still alive’ (1 Tim.5:6). Such a life is worse than death: neglectful of everything good, active in all that is evil; self-destructive and self-hating, it continuously drives itself from bad to worse.” (The Homilies, pps. 244-245)