At that time, the Lord Jesus got into a boat, crossed over, and came to His own city. Then behold, they brought to Him a paralytic lying on a bed. When Jesus saw their faith, He said to the paralytic, “Son, be of good cheer; your sins are forgiven you.” And at once some of the scribes said within themselves, “This Man blasphemes!” But Jesus, knowing their thoughts, said, “Why do you think evil in your hearts? For which is easier, to say, ‘Your sins are forgiven you,’ or to say, ‘Arise and walk’?  But that you may know that the Son of Man has power on earth to forgive sins-then He said to the paralytic, “Arise, take up your bed, and go to your house.”  And he arose and departed to his house.  Now when the multitudes saw it, they marveled and glorified God, who had given such power to men. 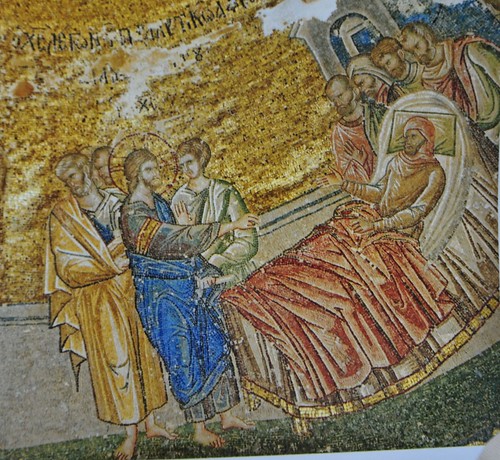 St. John Chrysostom (d. 407AD) compares how Jesus heals to how a doctor normally goes about healing a patient:

“Not as in the case of a physician, for it is enough that Christ merely utters a command and all distress ceases. And the wonder is not only that He effects the cure with so much ease, but also without pain, causing no trouble to those who are being healed… Christ represses first of all the source of the evil. For the source and root and mother of all evil is the nature of sin. This it is which deprives strength of our bodies: this it is which brings on disease: therefore also on this occasion He said, ‘Take heart, my son your sins are forgiven.’ And on the other He said, ‘See, you are well! Sin no more, that nothing worse befalls you,’ intimating to both that these maladies were the offspring of sin. And in the beginning and outset of the world diseases as the consequence of sin attacked the body of Cain. For after the murder of his brother, after that act of wickedness, his body was subject to palsy.”  (Christ’s Power to Heal the Paralytic, O LOGOS PUBLICATION, pp 7-8)

Of note in St. John Chrysostom’s comments is that St. John wants to be clear about the miraculous nature of Christ’s healing.  Jesus is not just skillfully using the implements, methods and elixirs of doctors and pharmacologists.   Christ heals without causing any further illness, pain, or discomfort to the sick – no pungent or bitter astringents, no bleeding, no cutting of limbs or piercing of wounds.  Christ says the word, and the healing takes place.  It is much like the Genesis 1 creation story in which God speaks and creation takes form and it is all beautiful, and painless.  And the cures are instant, not requiring long periods of  recovery, recuperation or rehabilitation.

But note also that St. John is willing to attribute this illness, and all disease to sin.  He mentions a common idea in the Patristic period from Genesis 4:12.  In the Septuagint version of the story, Cain “trembles” as part of the consequence of killing his brother.  The Fathers generally understood this to be a disease (palsy) that came upon him as the result of committing murder.  Chrysostom like all the ancients did not know of any germ theory of disease.  So in general the ancients did not see disease as simply occurring in nature.  For the Fathers, what is natural is what existed before the Fall – and in Paradise there was no mention of disease.  All disease of the body only occurs after the Fall and thus is the result of sin.  Disease is thus a sign of the World of the Fall – the world we live in is not Paradise, it is not the natural world that God originally created or intended for humans to live in (see Genesis 3:14-20).  Healing, on the other hand, is a sign of the Kingdom of God.  So both illness and healing point to realities beyond the self, and show our connectedness to all of creation and all of history.   There is no such thing as a completely independent individual.  We all share a common human nature, a common human history.  We all live in the same world and experience the effects of sin, and of the love of God.  The “miracles” of Christ are most significant because they are signs of the Kingdom of Heaven.  Their importance is not that one person 2000 years ago got healed, or that someone today can be healed, but that they are signs to help us realize the mystery of creation and of salvation.  They are to make us aware of God.