On August 6 of each year we Orthodox celebrate the Feast of the Transfiguration of our Lord God and Savior Jesus Christ.   The significance of this Feast became ever more obvious in Orthodox history as the idea of salvation as theosis became the predominant understanding in the Church.  The monastic hesychasts especially after the 14th Century placed a lot of emphasis on this Feast in their own spirituality.   St. Matthew the Evangelist describes this event in his Gospel 17:1-9) – 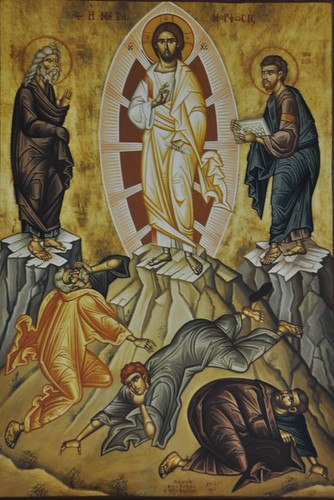 And after six days Jesus took with him Peter and James and John his brother, and led them up a high mountain apart. And he was transfigured before them, and his face shone like the sun, and his garments became white as light. And behold, there appeared to them Moses and Elijah, talking with him. And Peter said to Jesus, “Lord, it is well that we are here; if you wish, I will make three booths here, one for you and one for Moses and one for Elijah.” He was still speaking, when lo, a bright cloud overshadowed them, and a voice from the cloud said, “This is my beloved Son, with whom I am well pleased; listen to him.” When the disciples heard this, they fell on their faces, and were filled with awe. But Jesus came and touched them, saying, “Rise, and have no fear.” And when they lifted up their eyes, they saw no one but Jesus only. And as they were coming down the mountain, Jesus commanded them, “Tell no one the vision, until the Son of man is raised from the dead.”

“The Transfiguration, like Christ’s Baptism, is a revelation of who Christ is – so much more than a prophet, as the disciples had at first perceived. It was also a revelation of the Holy Trinity. We hear the voice of the Father and see the light of the Holy Spirit and the blinding face of the Son. ‘Today on Tabor in the manifestation of your light, O Lord,’ the Orthodox Church sings on August 6, the Feast of the Transfiguration, ‘your light unaltered from the light of the unbegotten Father, we have seen the Father as light, and the Spirit as light, guiding with light the whole creation.’ […] The icon is not only about something that once happened on top of Mount Tabor or even about the identity of Christ. It also concerns human destiny, our resurrection and eventual participation in the wholeness of Christ. We will be able to see each other as being made in the image and likeness of God. We too will be transfigured. Through Christ we become one with God. The Greek word is theosis; in English, deification. ‘God’s incarnation opens the way to man’s deification,’ explains Metropolitan Kallistos of Diokleia. ‘To be deified is, more specifically, to be “christified”: the divine likeness that we are called to attain is the likeness of Christ. We are intended, said Saint Peter, “to become sharers in the divine nature.”  ’ ” ( Praying With Icons, pp 102-103) 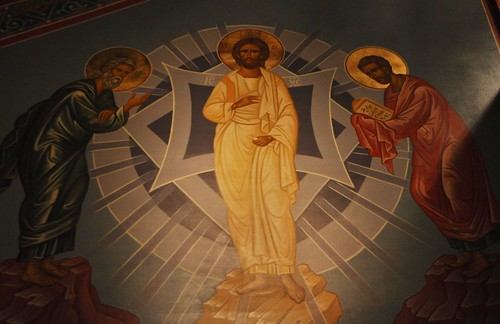