As we have seen in the previous blogs Jesus Christ recognizes the authority of the Jewish Scriptures for revealing God’s plan of salvation.  He claims all of the Scriptures as being a prophecy about the Messiah, Himself.  Thus Christ is revealing the purpose and the meaning of the Law, the Psalms and the prophets.   This becomes the very core of disputation with the other Jewish teachers of His day.

The Passover of the Jews was at hand, and Jesus went up to Jerusalem. In the temple he found those who were selling oxen and sheep and pigeons, and the money-changers at their business. And making a whip of cords, he drove them all, with the sheep and oxen, out of the temple; and he poured out the coins of the money-changers and overturned their tables. And he told those who sold the pigeons, “Take these things away; you shall not make my Father’s house a house of trade.” His disciples remembered that it was written, “Zeal for thy house will consume me.” The Jews then said to him, “What sign have you to show us for doing this?” Jesus answered them, “Destroy this temple, and in three days I will raise it up.” The Jews then said, “It has taken forty-six years to build this temple, and will you raise it up in three days?” But he spoke of the temple of his body. When therefore he was raised from the dead, his disciples remembered that he had said this; and they believed the scripture and the word which Jesus had spoken.   (John 2:13-22)

And we see in the above text that once again, even His disciples did not immediately understand Christ’s actions and words any more than His opponents did.  Only later, after the resurrection, do His disciples begin to comprehend that the Scriptures bear witness to Christ. 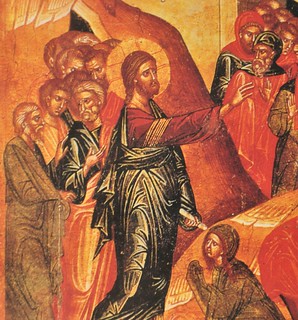 What is clear in the Gospels is that Christ’s relationship with other rabbis is at times contentious.  Jesus makes it plain that he believes the problem with the faith of some of his interlocutors is precisely in their misunderstanding and misinterpreting the Scriptures.   For example in disputing with the Sadducees, Jesus makes it clear that they lack comprehension of God’s message in the Jewish sacred texts.  The Sadducees at one point are trying to show how logically absurd a notion of the resurrection is and tell the story of a woman who has had several husbands and they mockingly want to know if there is a resurrection to which one would she be married in this afterlife?

But Jesus answered them, “You are wrong, because you know neither the scriptures nor the power of God. For in the resurrection they neither marry nor are given in marriage, but are like angels in heaven. And as for the resurrection of the dead, have you not read what was said to you by God, ‘I am the God of Abraham, and the God of Isaac, and the God of Jacob’? He is not God of the dead, but of the living.” And when the crowd heard it, they were astonished at his teaching.   (Matthew 22:27-33)

Worth noting in the debate is that both Jesus and his opponents accept the authoritative role of the Scriptures in governing how to live their life on earth.  For the Sadducees the Torah is binding on Jews and even death does not alter the eternal nature of the Law’s demands.  It is as if the Torah has a Karmic nature by which even God must abide.    Jesus clearly sees God as Lord even over Torah:  God is not bound by Torah, but Torah serves God’s will and plan. Just as the Sabbath was made for man and not man for the Sabbath (Mark 2:27), so too the Torah serves God and is subservient to God’s will rather than God being bound by Torah. Jesus tells the Sadducees to pay attention to the details of the Scriptural text.

Jesus said to them, “Have you never read in the scriptures: ‘The very stone which the builders rejected has become the head of the corner; this was the Lord’s doing, and it is marvelous in our eyes’? Therefore I tell you, the kingdom of God will be taken away from you and given to a nation producing the fruits of it.” When the chief priests and the Pharisees heard his parables, they perceived that he was speaking about them. But when they tried to arrest him, they feared the multitudes, because they held him to be a prophet.   (Matthew 21:42-46)

Jesus takes Psalm 118:22-23 and applies it to Himself.  He, the Messiah, is the cornerstone to understanding the Scripture.  The entire interpretation of the prophecies and promises of God rests on the Messiah.  Because the other Jewish rabbis don’t understand this, they misinterpret the purpose of Torah and God’s promises.

St. Peter in his First Epistle makes use of the same ideas and passages which Christ uses to describe the fellowship of the disciples:

Come to him, to that living stone, rejected by men but in God’s sight chosen and precious; and like living stones be yourselves built into a spiritual house, to be a holy priesthood, to offer spiritual sacrifices acceptable to God through Jesus Christ. For it stands in scripture: “Behold, I am laying in Zion a stone, a cornerstone chosen and precious, and he who believes in him will not be put to shame.” To you therefore who believe, he is precious, but for those who do not believe, “The very stone which the builders rejected has become the head of the corner,” and “A stone that will make men stumble, a rock that will make them fall”; for they stumble because they disobey the word, as they were destined to do. But you are a chosen race, a royal priesthood, a holy nation, God’s own people, that you may declare the wonderful deeds of him who called you out of darkness into his marvelous light.    (1 Peter 2:4-9)

Additionally, Christ’s fulfilling of the Scriptures says something about who He is: the Messiah is also the Lord.   Jesus performed various signs and wonders which His opponents could not refute, but they did reject His interpretation of the events.

The Jews answered him, “It is not for a good work that we stone you but for blasphemy; because you, being a man, make yourself God.” Jesus answered them, “Is it not written in your law, ‘I said, you are gods’? If he called them gods to whom the word of God came (and scripture cannot be broken), do you say of him whom the Father consecrated and sent into the world, ‘You are blaspheming,’ because I said, ‘I am the Son of God’?  (John 10:33-36)

Jesus uses the Torah given to the Jews as pointing to Himself.  The Scriptures bear witness to the Word of God made flesh.  The signs, miracles and wonders which Christ did also bear witness to His being able to do acts of God.  Thus both the historical documents of the Jews, their Scriptures, and the very deeds of Christ, bear witness to the divine power in Christ.  They reveal who Jesus is.

Jesus is the God incarnate who teaches us.  Isaiah’s prophecy that we would be taught by God (Isaiah 54:13) is fulfilled in Christ.

But this is the covenant which I will make with the house of Israel after those days, says the LORD: I will put my law within them, and I will write it upon their hearts; and I will be their God, and they shall be my people. (Jeremiah 31:33)

God Himself transfigures and transforms not just our hearts but humanity itself in the incarnation and in the resurrection of Christ.

Next:  The Scriptures Written for Us