This is the 12th blog in this series which began with the blog Being and Becoming Human. The previous blog is In the Image and Likeness of God.  In this blog we will consider the writings of one of the Patristic Saints, Gregory of Nyssa, regarding the image and likeness of God in each human.  It is obvious in the writings of St. Gregory that he has a very high opinion of humanity, especially in the natural state in which God originally created humans.

“’For this is the safest way to protect the good things you enjoy: Realize how much your Creator has honored you above all other creatures.  He did not make the heavens in His image, nor the moon, the sun, the beauty of the stars or anything else which surpasses understanding.  You alone are a reflection of eternal beauty, a receptacle of happiness, an image of the true light.  And, if you look to Him, you will become what He is, imitating Him who shines within you, whose glory is reflected in your purity.  Nothing in the entire creation can equal your grandeur. All the heavens can fit into the palm of the hand of God . . . Although He is so great that He can hold all creation in His palm, you can wholly embrace Him.  He dwells in you. (St. Gregory of Nyssa)”  (Kyriaki FitzGerald, PERSONS IN COMMUNION, p 72)

One can marvel at the celestial bodies in all their magnificence and be totally awed by them, but then St. Gregory reminds us that it is humans alone who are made in God’s image and who through their life choices can become like God.  Gregory’s words have to considered in the contest of the ancient world in which some thought of the celestial bodies as gods, and many practiced astrology in one form or another assuming the celestial bodies influenced or had power over humanity and all the earth.  However great anyone wanted to imagine the heavenly bodies to be, St. Gregory in line with the Christian tradition says humans are even more magnificent.  All the universe can fit into the palm of one of God’s hands, yet God Himself dwells in each human being!

“But will God dwell indeed with man on the earth? Behold, heaven and the highest heaven cannot contain You…”  (2 Chronicles 6:18)

“For thus says the high and lofty One who inhabits eternity, whose name is Holy: “I dwell in the high and holy place, and also with him who is of a contrite and humble spirit, to revive the spirit of the humble, and to revive the heart of the contrite.”  (Isaiah 57:15) 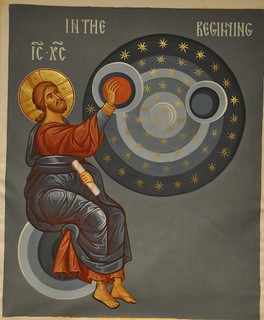 While the Christians saw the celestial bodies as part of God’s creation and not gods or powers in their own right, still they were amazed that of all the greatest things in the universe whether visible (like the celestial bodies) or invisible (like the angelic bodiless powers), it is humanity whom God favors with the imprint of His divine image.  It is also with humanity that God shares all the gifts of the divine life. It is in humans that God dwells and makes each human to be a microcosm of all that exists.  This is a wonder beyond understanding.

“For man then possessed all those gifts about which we now speculate: incorruptibility, happiness, independence and self-determination, a life without toil or sorrow, absorption in divine things, a vision of the Good with a mind unclouded and pure of any interference.  This is what the account of Creation suggests in a few words, where it tells us that man was formed in God’s image, and that he lived in Paradise enjoying the things that grew there.  And the fruit of those trees was life and knowledge and the like.”  (St. Gregory of Nyssa, FROM GLORY TO GLORY, p 88)

St. Gregory like a number of Patristic writers assumed that mortality was not part of the original human life.  Humans were created with the potential for immortality, but by exercising their free will to choose sin rather than to obey God, humans failed to actualize all that God was willing to share/give to them.  Humans assumed that their true freedom came in rejecting the Lordship of God, but discovered that rebellion against God enslaved them to sin and death.

“The story of creation bears witness to the fact that all that God created was very good (Gen 1:31).  And among these very good things was man.  Or rather, he was fashioned in a beauty which far exceeded all other things.  For what else could be as lovely as the image of incorruptible beauty?  And if all things were very good, and man was among them, indeed above them, then surely death had no place in man.  For man would not have been beautiful if he had had within him the miserable and gloomy form of death.  No, he was the image and likeness of eternal life, he was truly and exceedingly good, radiant with the luminous form of life.

Man also kept the garden of God, and it teemed with life in the abundance of its bountiful trees.  God’s commandment was the law of life, promising that man would not die.  And in the midst of the trees of the garden was one which was filled with life (however we may interpret the meaning of this tree), and its fruit was life.  But with it was also a tree of death, whose fruit we are told is both good and evil.“  (St. Gregory of Nyssa, FROM GLORY TO GLORY, p 257-258)

Humans created in God’s image were given the free will and potential to form themselves into the likeness of God.  God desired that humans partake of the divine life.  Humans sadly chose to follow a different path and not only failed to become like God, but even fell from their highly exalted position becoming like the other animals which God had created.   Sin in effect reduced us to something less than human, less than God intended for us to be. 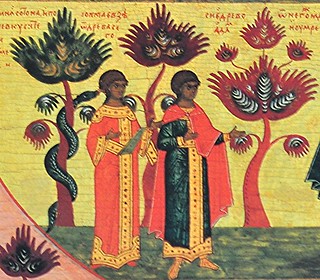 “… so the one who falls into the mire of sin no longer is the image of the incorruptible God, and he is covered through sin with a corruptible and slimy form which reason advises him to reject.  … The rejection of what is alien means a return to what is proper and natural to oneself, but this is not possible to achieve, unless one be created anew.  For being like the divine is not our function, nor is it the product of human ability, but it is part of the generosity of God who freely, at the birth of the first man, gave our nature a likeness to Himself.

The human effort extends only to this: the removal of the filth which has accumulated through evil and the bringing to light again the beauty in the soul which we had covered over.  It is such a dogma that I think the Lord is teaching in the Gospel to those who are able to hear wisdom when it is mysteriously spoken: ‘the kingdom of God is within you.’   This saying shows, I believe, that the goodness of God is not separated from our nature, or far away from those who choose to seek it, but it is ever present in each individual, unknown and forgotten when one is choked by the cares and pleasures of life, but discovered again when we turn our attention back to it.”   (St. Gregory of Nyssa, ASCETICAL WORKS, p 44)

Sin has not completely erased the divine goodness God puts in each human being.  We are not totally depraved, but in St. Gregory’s teaching we are like a diamond which has become encrusted with filth and dirt.   The goodness and beauty is still within us and we still have our free wills and so can cooperate with God to work out our salvation.

We are gifted by God with free will and with the Holy Spirit so that we can respond to the salvation offered us in Jesus Christ our Lord.

“Staying with Gregory of Nyssa, we see that for him, the image of God consists principally in man’s free will, his power of ‘self government.’  Not to have any other overlord—this is indeed the property of a king.”   (Elizabeth Theokritoff, LIVING IN GOD’S CREATION,  pp 70)

We have encountered this theme numerous times in Orthodox theology – humans are created by God to be priests, prophets and kings.  The image of God in us makes this possible.  However, because we have free will, God does not do for us what we must do for ourselves.   He places before us a choice and invites us to choose eternal life.

Thus says the Lord: “I call heaven and earth to witness against you this day, that I have set before you life and death, blessing and curse; therefore choose life, that you and your descendants may live, loving the LORD your God, obeying his voice, and cleaving to him; for that means life to you and length of days…”   (Deuteronomy 30:19-20)

“Say to them, As I live, says the Lord GOD, I have no pleasure in the death of the wicked, but that the wicked turn from his way and live; turn back, turn back from your evil ways; for why will you die, O house of Israel?”  (Ezekiel 33:11)

Next: In the Image of God

I learned today two new, related words.   They are wonderfully joyous and beautiful and I don’t ever remember hearing them or reading about them before today.

The first (what for me  personally is a neologism ) is apricity, which I learned is a term used for “the warmth of sun in winter.”   (I liked that definition better than the simple “warmth of the sun”).   I never new there was a word for that most wonderful event of feeling the warm sun on a winter day. 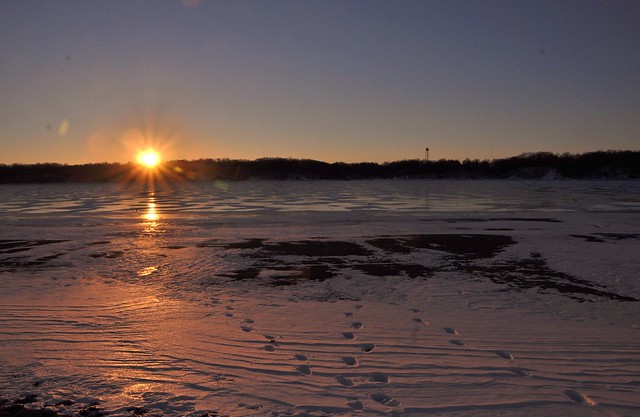 The second word, related to the first which I also thought was such a warm and wonderful term is apricate – to bask in the sun.  I had never heard this sunbathing term before but fell in love with the word.  Any day that one can apricate is a good day! 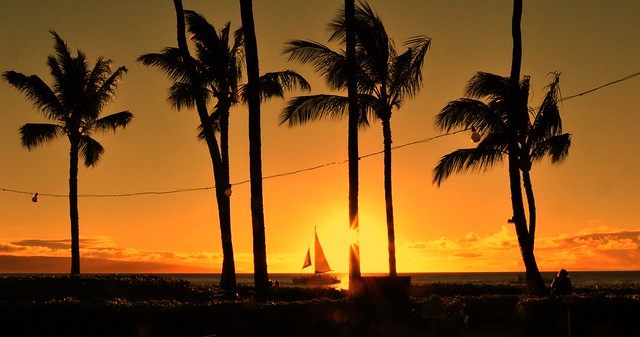