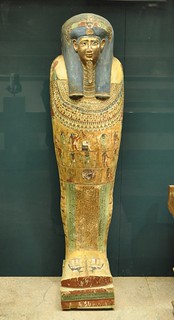 This is the 14th  blog in this series which began with the blog Being and Becoming Human. The previous blog is In the Image of God.  This will be the last blog to focus prominently on humans as being created in the image and likeness of God.  As we continue to explore a theological understanding of what it is to be human, we will in future blogs look at humans as related to animals and to angels, what it is to be both spiritual and physical beings.

In this blog we again encounter the awe with which many ancient and modern theologians view humans.  We are created in God’s image and we are God’s glory.  This may seem amazing to us when we consider the condition the world is in and the human behaviors we observe daily through media outlets.   However, Orthodox theology tends to consider what is natural to humans is the condition in which God created us before the Fall.  All we know about humans from studying anthropology, history, biology, and archeology is life in the world of the Fall, but this does not reveal to us what it is to be human, created in God’s image.    Sin does not however diminish God’s image in us, nor that the kingdom of God is within us (Luke 17:21).  We can learn of this dimension of humanity only from the Church’s Scripture and theology.

“’The glory of god is man’, affirms the Talmud… and St Irenaeus states the same: ‘The glory of God is a living man.’  The human person forms the center and crown of God’s creation.  Man’s unique position in the cosmos is indicated above all by the fact that he is made ‘in the image and likeness’ of God (Gen 1:26).  Man is a finite expression of God’s infinite self-expression.”   (Kallistos Ware, THE ORTHODOX WAY, pp 64) 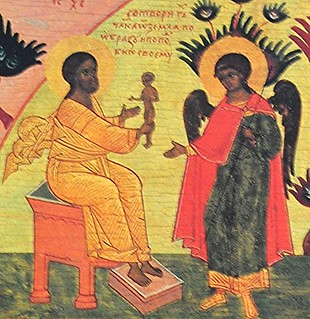 What a wonderful choice of words:  “Man is a finite expression of God’s infinite self-expression.”   The God who we glorify in the Orthodox Liturgy as being indescribable, ineffable, invisible, and inconceivable,  improbably imprints His image (icon) on each human being.  That same God then becomes incarnated in Christ, revealing His image in the God-man Jesus.  “No one has ever seen God; the only Son, who is in the bosom of the Father, he has made him known” (John 1:18).

This is the great mystery revealed in Christ.   And, as Fr. John Behr explains we come to understand the narrative of the Bible theologically, not through the lens of a linear history.  The Bible is God’s revelation of God’s perspective of creation and history.  Adam is not before Christ, but rather Adam is made in Christ’s image and likeness. This thinking is based exactly in Christ’s claim in John 8:56-58 that he pre-existed Abraham:

Jesus said:  “’Your father Abraham rejoiced that he was to see my day; he saw it and was glad.’ The Jews then said to him, ‘You are not yet fifty years old, and have you seen Abraham?’ Jesus said to them, ‘Truly, truly, I say to you, before Abraham was, I am.’”  (For other biblical passages about Christ’s pre-existing his older cousin John the Forerunner, as well as not only human history but creation itself, see for example:   John 1:1-15, John 17:5, Philippians 2:5-8 and Hebrews 1:1-3).

Adam anticipates the fullness of humanity, but it is the pre-eternal Word of God who is the type for Adam and then becomes Adam’s completion and fulfillment in Jesus Christ, the incarnate Word of God.

“St. Nicholas Cabasilas explains how this was so:  he points out that it was for the new Adam that the old Adam was created at the beginning, that human nature was equipped with a mind and desire to direct these towards Christ (THE LIFE IN CHRIST 6.91-4 [6.12]).

For God, who sees all things from an eternal perspective, who sees all things before they come to be and after they have passed away, who holds all things – past, present, and future – in the palm of his hand, for him, Christ is first, the beginning, and so Adam is created in the image of Christ, already looking towards him.  But for us, we know Adam first: that is our experience of human existence, that is how we are brought into this world, needing to die to ourselves, in baptism and taking up the cross, before we put on Christ.

And so, although, for us, Christ appears to come later – at the fullness of time – this in appearance is in fact a revelation of the mystery hidden from all eternity.”  (John Behr, THE CROSS STANDS WHILE THE WORLD TURNS, pp 158-159)

Humans were created in order to make the incarnation possible.  We were created to be God-bearers, untied to God in our empirical existence.  We do not find God by escaping the earth or our bodies, but rather in and through them we encounter God.  We were create to be God’s free children, not God’s robotic slaves.   “But to all who received him, who believed in his name, he gave power to become children of God; who were born, not of blood nor of the will of the flesh nor of the will of man, but of God”  (John 1:12-13). 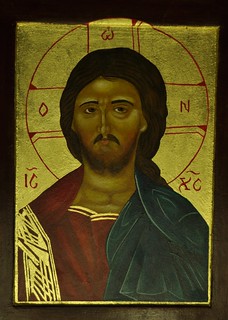 “… we have to understand Christ to be the ‘blueprint’ of what Man was meant to be, the perfect image of God and reflection of this glory (Morna Hooker).’  The question, of course, is, What precisely was humanity meant to be?  What was the significance of being ‘in the image of God’ and ‘a reflection of his glory’?

Throughout Israel’s history, the language of humanity being created in the image of God carried polemical weight.  According to the mythology of Babylon, for instance, humanity was created as a slave people to do the menial labor of the gods.  In the face of such a view of humanity, Israel in exile under Babylonian rule told a different story, a story of humanity created not to be slaves but to be the image-bearer of God and to reflect God’s glory in their stewardly dominion over the earth (Gen 1:26-28; 2:15).”    (Stanley Porter, HEARING THE OLD TESTAMENT IN THE NEW TESTAMENT, p 195)

The Jewish and Christian Scriptures do not portray a Creator who brings into existence slaves or automatons to do His divine will.  Rather the Triune God creates humans whom God then must choose to love, for though endowed with God’s image and inbreathed with God’s Spirit, God also gives us free will – which includes the ability to make ourselves unlovely and even to make ourselves into God’s enemies.  Nevertheless, God chooses to love us despite our sinful choices.  “God shows his love for us in that while we were yet sinners Christ died for us” (Romans 5:8).

“So, to be created according to the image of God and according to his likeness suggests that we have been created with some kind of affinity for God which makes possible a process of assimilation to God, which is, presumably, the point of human existence.”   (Andrew Louth , Introducing Eastern Orthodox Theology, Kindle Loc. 1645-47)

The God who is love still has to choose to love us humans for we do not behave in such a way as to earn or deserve God’s love. God proclaims Himself to be  “a God merciful and gracious, slow to anger, and abounding in steadfast love and faithfulness, keeping steadfast love for thousands, forgiving iniquity and transgression and sin…” (Exodus 34:6)  And for God to love us humans, God will be put to the test and will have to exhibit mercy and patience, faithful and forgiveness to people who will commit iniquity, transgressions and sins.  We prove ourselves not to be the most loveable and lovely of creatures, yet despite our sinful rebellion, God bestows continual love upon us.

“It is a great mystery that man can attain to knowledge of God.  Man can know God, first of all, because God has created him in His image and after His likeness, capable of reflecting the perfection of his Creator.  To enable him to attain to this perfection, God asks man to love Him with all his heart, with all his soul, and with all his strength; and to love his neighbor as himself (Luke 10:27).  Man is made truly noble through God’s gift of this commandment of love.  Secondly, man can know God through co-operation with Him: God Who is infinitely great, deigns to depend upon man, who is infinitely small, in bringing His purposes to perfection. “ (Archimandrite Zacharias, REMEMBER THY FIRST LOVE, p 322)

The human potential, all God given, is great.  Yet humans have frequently failed to reach their potential.  As St. Paul has it:  “all have sinned and fall short of the glory of God”  (Romans 3:23).   God though still offers to humanity the gift of godlikeness, theosis.   We are not mere mortals or nothing but animals.  We have to learn to live according to our God-given nature, but it requires great ascetic effort on our part to overcome ourselves. 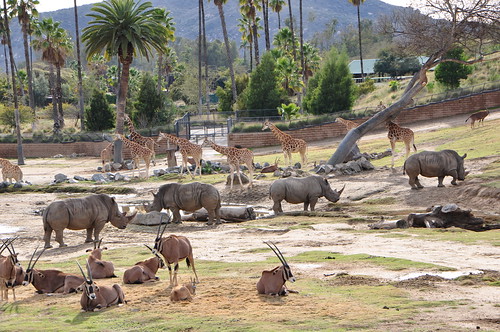 “Orthodox culture derives from two sources.  The first source is the fundamental and most important one, namely the Gospels.  That source is the teaching and proclamation about God-manhood, in other words, about the mystery of the eternal and the mystery of the human.  It is the teaching that humanity is exceptionally important and valuable for the Creator.  It is the teaching that humanity is raised above all creation because the Eternal itself made contact with it, because human beings are created in the image and likeness of the Creator and in them lives a kind of programme for the future: to develop from beings akin to the animals to beings akin to heaven.”  (Alexander Men,  CHRISTIANITY FOR THE TWENTY-FIRST CENTURY, p 154) 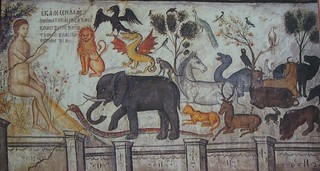 Next:  Angel and Animal; Spiritual and Physical