St. John Chrysostom writes a  commentary on the Gospel lesson of Luke 5:1-11 using some wonderful imagery.  Below is the Gospel, followed by Chrysostom’s comments. 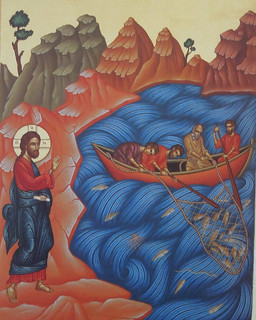 Once while Jesus was standing beside the lake of Gennesaret, and the crowd was pressing in on him to hear the word of God, he saw two boats there at the shore of the lake; the fishermen had gone out of them and were washing their nets. He got into one of the boats, the one belonging to Simon, and asked him to put out a little way from the shore. Then he sat down and taught the crowds from the boat. When he had finished speaking, he said to Simon, “Put out into the deep water and let down your nets for a catch.” Simon answered, “Master, we have worked all night long but have caught nothing. Yet if you say so, I will let down the nets.” When they had done this, they caught so many fish that their nets were beginning to break. So they signaled their partners in the other boat to come and help them. And they came and filled both boats, so that they began to sink. But when Simon Peter saw it, he fell down at Jesus’ knees, saying, “Go away from me, Lord, for I am a sinful man!”  For he and all who were with him were amazed at the catch of fish that they had taken;  and so also were James and John, sons of Zebedee, who were partners with Simon. Then Jesus said to Simon, “Do not be afraid; from now on you will be catching people.” When they had brought their boats to shore, they left everything and followed him. 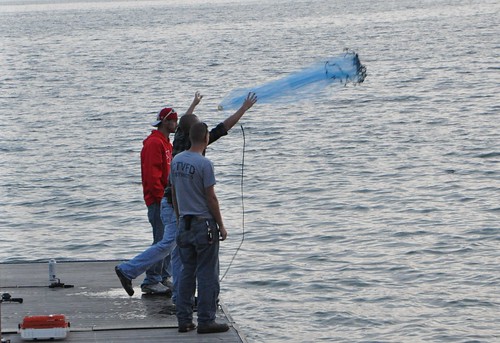 “Every time the Gospel is preached, I see no one else but Peter or Andrew and the whole choir of Apostles spread out the Evangelical Net (or the Net of the Gospel). The spectacle was strange, to see the Savior on the ocean and those who are taught standing on the beach. Really this is strange, the fish on the land and the Fisherman on the ocean. The casting out of that net into the ocean was an icon of the Evangelical Word (or the Word of the Gospel).

‘He found,’ He says, ‘the Fisherman cleaning out their nets’ (Luke 5:2), because they had been exhausted from fishing…The Savior found them exhausted from fishing, and the Master of the pursuit stood next to them. What did He do? First of all, He taught them the  Word of the Truth, and then He gives them the command to drop the net. […] The power of the One, who commanded and a multitude of fish assembled, appeared before the net. This was an icon of the Church of the Ecumene [note: civilized world]. The net tore. They waved at the partner ship to come and catch them. Two ships were needed to help in the fishing. Because, truly, if the Prophets did not stand by as helpers of the Apostles and if after the prophecies the appearance of the Apostles did not follow, the Fisherman would not have been able to catch fish. Hence, our Savior wants to show us how the catching of the fish is an icon of the Church; in order to teach Peter even more so with this example, He exhorts Peter towards manliness and says, ‘Do not be afraid; henceforth, you will be catching men’ (Luke 5:10); from now on, He says, from the moment you tried the power and you learned that even illogical things are obedient to My word and all things follow My mere nod. Enough examples, use them now during your hunt (fishing). He did not say, ‘You will fish men,’ but ‘You will catch men.’ The fish, when they are caught, are transported from life to death, but men from death to life. 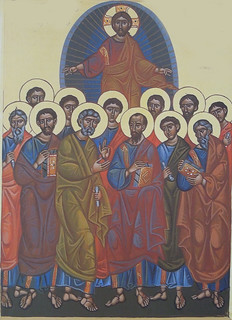 ‘From now on,’ He says, ‘You will catch men.’ Why does He tell him, ‘Do not be afraid?’ Let it be; the promise was brilliant. Then why did He say, ‘Do not be afraid?’ Simply, since he remembered the previous sins, He says, ‘Do not be afraid of yourself’ because you are a sinner, but consider yourself as an Apostle, who had received a command to net the ecumene with the word of the Master. ‘Do not be afraid.’ Let every sinner listen to this sentence from Christ. ‘Do not be afraid,’ but from now on show repentance. Therefore, in order to return to the logical sequence of my homily, the net is nothing else than an icon of the Evangelical teaching of the Savior.”

Jesus calls His disciples to go into the world to do their fishing – on land, with fellow humans being the desired catch.  Unlike fishing which leads to the death of the fish who are caught, the evangelical net of the Church gives life to those who enter into the net.  Why did Christ have the disciples successfully make this huge catch of fish only to then have them abandon the fishing business?   Chrysostom says it taught them that even non-rational fish obey Him, so surely humans will want to obey the Gospel.  It gave the apostles courage to take the Gospel to the world.

From the Akathist of  the Sweetest Lord Jesus:

We see most eloquent orators as voiceless as fish when they must speak of you, O Jesus our Savior.  For it is beyond their power to tell how you are and remain perfect man and immutable God at the same time. 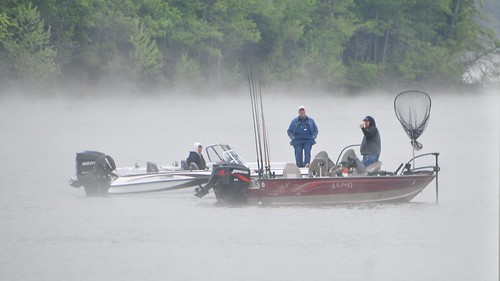