In the Gospel Lesson of  Luke 7:11-16 we learn of one of the great signs that our Lord Jesus Christ did in raising from the dead the only son of a widow, whose names we never learn.

Soon afterwards Jesus went to a town called Nain, and his disciples and a large crowd went with him. As he approached the gate of the town, a man who had died was being carried out. He was his mother’s only son, and she was a widow; and with her was a large crowd from the town. When the Lord saw her, he had compassion for her and said to her, “Do not weep.” Then he came forward and touched the bier, and the bearers stood still. And he said, “Young man, I say to you, rise!” The dead man sat up and began to speak, and Jesus gave him to his mother. Fear seized all of them; and they glorified God, saying, “A great prophet has risen among us!” and “God has looked favorably on his people!” 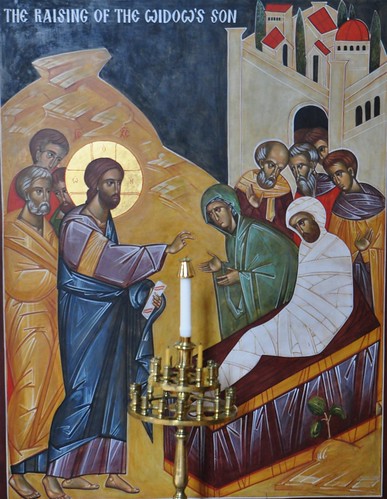 “ ‘Weep not!’, the Lord comforts the mourning mother. This is said by Him who does not think, as many of us do, that the soul of the dead boy has gone down to the grave at his body’s departure; He knows the whereabouts of the dead boy’s soul; He who holds the soul here under His authority. And we comfort those who mourn with these same words, even though our hearts are filled with tears.” ( Homilies, p 204)

When you saw the widow weeping bitterly, O Lord,

You were moved with compassion,

Raising her son from the dead as he was being carried to burial.

Raise my soul, deadened by sins, as I cry:

(Kontakion 2 from the Akathist to the Sweetest Jesus)