“It is not just interesting to know what Maximus [the Confessor] thought about our subject; we need to try to reinterpret his ideas in the light of what we now know about the cosmos through the advances of modern science. For Maximus, like the other Fathers of the Church, took for granted the scientific wisdom of his day and readily made use of it.”   (A Louth, Toward an Ecology of Transfiguration: Orthodox Christian Perspectives on Environment, Nature, and Creation, Kindle  Loc. 1401-4)

One insightful way to understand a culture through its history is to look closely at the culture through the lens of one particular aspect of society.  That is the approach of Efthymios Nicolaidis and Susan Emanuel in their monumental study, Science and Eastern Orthodoxy: From the Greek Fathers to the Age of Globalization .   The task was daunting for it covers over 1600 years  and looks at not one culture but a series of organically related cultures.   The book moves from the newly Christianized Roman Empire the Fourth Century  which morphs into the Greek Byzantine empire all the way through the Turkish conquest of Byzantium to the rise of Russia and the modern Greek state.

And, while the book is using “science” as the lens through which to read Orthodox history, one has to acknowledge even that lens morphs over time.  What we think of as science today has no exact equivalent in the ancient world which is why we consider those cultures as “pre-scientific”.  For what becomes obvious is that for much of Greek Orthodox history the Orthodox thought philosophically about science; so what one encounters in much of Orthodoxy’s history is how the Greek Orthodox related to philosophy, nature, science and Hellenism.   Additionally it becomes obvious in the book that “Eastern Orthodoxy” means everything from Byzantine to Greek to Hellenism to Orthodoxy.     One other factor is that because there was no sense of the separation of church and state or a separation of secular and religious in Byzantium it is most difficult to discern what attitudes were held mostly by the Emperor and ruling class and which were really religious attitudes towards philosophy, nature and science. 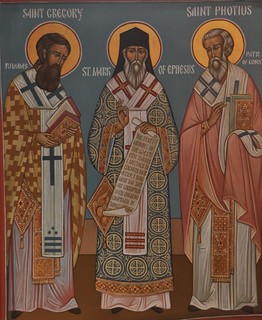 I think it is fair to say there is no one consistent, monolithic attitude of Eastern Orthodoxy toward “science.”   The thinking changed through history depending on who the Emperor was and what was happening in the world around the Byzantine Empire.  The Church Fathers themselves certainly do not agree on every issue, especially issues which they viewed as not absolutely central or essential to theology (for example St. Basil believed the moon shone with its own light, whereas his brother, St. Gregory completely disagreed and believed the moon reflected sunlight).   As Eastern Orthodoxy itself experienced the massive historical changes in that part of the world, its attitude toward philosophy, natural science and even its own past underwent immense change.   The early Patristic age for example saw Hellenism as paganism, whereas in later Byzantine History as the Empire shrank in size, the Greek Orthodox saw themselves as the inheritors of Hellenism and actively promoted it.  They tended to see “science” not as a method to understand the universe but as their cultural inheritance from ancient Hellenistic thinkers.  They were very proud of this inheritance to the point of chauvinism and therefore resisted modern science as neither Hellenistic nor Greek and thus of little value.

“The preponderant place occupied by secular knowledge at the Nicene court would have a major influence on the cultural identity of Byzantium. The word Hellenic (i.e., Greek), which had had negative connotations in Christian Byzantium, acquired under  [Byzantine Emperor Theodore] Laskaris (d. 1222AD) a positive significance. The emperor regarded his people as descendants of the ancient Hellenes, his army as the Hellenic army, and Asia Minor as the Hellades. Culminating this return to the Hellenic ideal, Theodore compared Nicaea to Athens during its golden age, even maintaining that it surpassed it, since Nicaea possessed both secular and Christian philosophers. Theodore’s use of the term philosophers to designate theologians must have been shocking for the Orthodox, who made a clear separation between philosophy as a secular and often profane science and theology.”  (Kindle Loc. 1787-93)

Nicolaidis and Emanuel’s book is impressive just on the amount of research it must have taken to compile all the information in the book.   Just looking at “Eastern Orthodoxy” and science over a 1600 year history is mindboggling.  They are to be commended for their work.  The relationship between Orthodoxy and “science” is of particular interest to me personally, though I will say that ultimately I found the 4th CenturyPatristic writer’s engagement of “science” to be far more creative and interesting than later Eastern Orthodox leaders.  Many of the later Orthodox writers tended to mostly compile and repeat the earlier Patristic teachers.   The later writers lived in a Byzantine universe that was continually shrinking, literally and in terms of its intellectual engagement with ideas from beyond its borders.     Not only were the Eastern Orthodox losing importance in the world dominated by Islam and the Christian West, but the radical worldview which came about through scientific discovery left the Eastern Orthodox frozen in the distant past of a long disappeared worldview.    Thinkers both Islamic and Western might have admired the glories of ancient Hellenism, but the modern scientific paradigm had little use for ancient Hellenistic abstract theories as it became increasing focused on the empirical, materialistic cosmos.

In this blog series, I will take a look at the book, Science and Eastern Orthodoxy: From the Greek Fathers to the Age of Globalization (Medicine, Science, and Religion in Historical Context).   It is a most fascinating way to read Byzantine / Hellenistic / Greek Orthodox cultures.   My interest though is more limited than the scope of the book.   I am more interested in how modern scientific ideas were or might have been perceived by Orthodox writers.  I have a mindset which is quite willing to distinguish Orthodoxy from its imperial, Hellenistic, Greek or Byzantinue cultures.    Of course, this can’t be totally done for Orthodoxy indeed was wedded symphonically to its cultures and has no incarnation apart from them.

First, a look at St. Basil the Great and the Nicene, Cappadocian attitude toward understanding the created order. 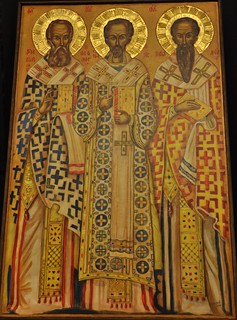 “Basil wished simultaneously to incite the public to lift its gaze from the created world to the Creator, to codify a story (Genesis) that was foreign to the tradition of Greek cosmology and make it concordant with the image of the world of his intellectual milieu, and finally to combat the “external” enemies of Christianity (pagans, Manichaeans) as well as the “internal” enemies (adepts of Arianism and Christian Gnosticism).”  (Kindle Loc. 495-98)

The early Patristic writers were engaged with the scientific and philosophical debates of their age.  They were thoroughly familiar with the philosophies at work in their culture which was in the Fourth Century not limited to Christianity but included pagan and heretical ideas.   The Orthodox actively debated the issues and did not live in fear of competing ideas, even when they were in the minority.

“By the time of his death, Basil, bishop of Caesarea, the first among the founding fathers of Orthodox dogma, intransigent combatant against the pagans but also “heretic” Christians, a brilliant orator, prolific writer—in short, an activist of the Christian Church—had laid the foundations of the Christian conception of nature and consequently defined the relations between science and faith. His affirmations were incisive, for “the truth is one,” and it does not like contradiction. One year later, his brother Gregory returned to several of Basil’s theses, which, when he found them in contradiction with the scientific knowledge of the era, he put them on the right path of natural philosophy.”   (Kindle Loc. 812-19)

In the above comments we see both that the Fathers were not hesitant to disagree with one another when it came to philosophical and scientific issues.  They respected the ‘secular’ scientific knowledge of their time.  As we just read St. Gregory was willing to contradict his older brother and to rewrite some of Basil’s ideas to make sure they conformed to the ‘scientific’ knowledge of Gregory’s day.

“Despite their sometimes literal reading of the Bible, the Cappadocean fathers Basil of Caesarea and Gregory of Nyssa belonged to the school of Alexandria. Their interpretation of Genesis, as we have seen, incorporated a system of the world that came from Greek and Hellenistic culture: a geocentric universe in the form of a sphere and a spherical earth.  In contrast, the Hexaemerons associated with the school of Antioch relied on a system of the world coming from Asiatic cultures: universes shaped in diverse forms and a flat earth. Throughout the Middle Ages, Orthodox scholars tended to embrace the cosmology associated with the school of Alexandria. The leading Byzantine mathematicians and philosophers adopted it, as did the royal court and most of the patriarchs. By contrast, the cosmology of the school of Antioch became the popular cosmology of the Middle Ages, propagated both orally and in such written works as the “Lives of the Saints.”  (Kindle Loc. 826-33)

So within the very broad experience of Christianity in the Byzantine world there were different schools of thought about scientific knowledge.  In any one age, the Fathers accepted as factually true different philosophical assumptions about the universe.  There was no one monolithic Patrisitic view of ‘science.’ 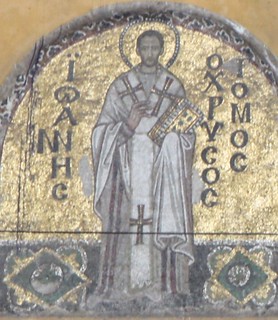 “In order to respond, as Basil did, to the Manichaeans, John [Chrysostom] began by supporting the fundamental thesis of Christian cosmology: matter did not exist before the Creation.  But in order to explain the first verse, “In the beginning, God created the heaven and the earth,” he departed from the Cappadocean fathers to claim that God first created heaven and then laid out the earth underneath it.  He created the roof first and then the foundations, for he was capable of doing something that men could never do. John’s cosmology was simple: a flat earth covered by a single heaven in the form of a vault. Heaven is immobile; it is the stars that move, and their movement serves to determine time.  We are far from the universe of the Cappadocean fathers, which we recall was composed of several heavenly spheres (which by their movement entrain the stars) and a spherical earth.”     (Kindle Loc. 841-48)

Thus from the 4th Century alone we see the Orthodox writers actively engaging secular culture and accepting differing scientific assumptions based on the philosophies and philosophers they each personally accepted.   They believed there were truths about the created order which were observable and indisputable, which is the basis for modern scientific thinking as well.   The early Christian Fathers however accepted these truths from ancient philosophers, whom they considered indisputably accurate, whereas modern science says truth should be verifiable through the scientific method of testing theories.  The Greeks as the book points out however were committed to the abstract ideas of Hellenistic Philosophers and were not very interested in testing theories nor in the instruments which could text theories.

Next:  Byzantine Science (I)