“This idea can be expressed as follows: in the body of Christ, the hierarchy is not so much a power as a function and a ministry which exists alongside other functions and ministries. Therefore, one must first of all accept that, in this sense, the whole church, from top to bottom, is hierarchical, for the chief apostle said: ‘Ye also, as lively stones, are built up a spiritual house, an holy priesthood, to offer up spiritual sacrifices, acceptable to God by Jesus Christ…Ye are a chosen generation, a royal priesthood, an holy nation, a peculiar people’ (1 Pet. 2:5,9).  Only on the basis of the principle of universal royal priesthood, of the hierarchism of the whole Church, can one understand and accept the distinction of the hierarchical functions. and avoid that exaggeration owing to which a clerical absolutism creeps in. This clericalism subverts the very principle of ecclesiastical hierarchism and divides the Church into two parts: the rulers and the ruled, the teachers and the taught, those who command and those who obey. It is to justify such a conception that dogmatic fictions of the vicariate of Christ and of the ‘apostolic succession’ as power and the organization of power arise, contrary to the Lord’s direct testimony:

And there was also a strife among them, which of them should be accounted the greatest. And he said unto them, The kings of the Gentiles exercise lordship over them; and they that exercise authority upon them are called benefactors. But ye shall not be so: but he that is greatest among you, let him be as the younger; and he that is chief, as he that doth serve. (Luke 22:24-26) 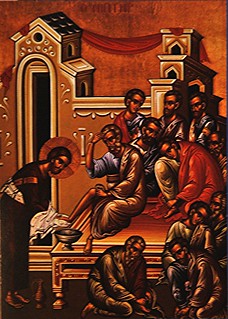 For Scripture it is not the institution of the primacy of Peter, or the apostolic primacy of the episcopate, but service, determined by the place of each member in the Church, that represents the fundamental norm of universal priesthood. This is the authentic ‘apostolic succession’ in the Church, and denies any basis for clerical absolutism or ‘monarchic episcopatism’ as manifestations of ecclesiastical hierarchism.”

Christ washing the feet of the disciples is a model for Christian leadership.  Christ is the High Priest who we are to imitate in the church.  He did not think equality with God was something to be grasped, but rather became a servant.

One thought on “Apostolic Succession and Church Hierarchy”