On the Sunday before Christmas we read the Gospel lesson of the birth of Jesus Christ according to St. Matthew.  That same Gospel lesson has St. Matthew’s recorded ancestry of Christ, tracing the Messiah’s ancestral roots back to the Patriarch Abraham and his wife Sarah.   It is with Abraham that God makes a covenant and a promise, giving both Abraham and Sarah new names reflecting their new relationship with God.

“Behold, my covenant is with you, and you shall be the father of a multitude of nations. No longer shall your name be Abram, but your name shall be Abraham; for I have made you the father of a multitude of nations. I will make you exceedingly fruitful; and I will make nations of you, and kings shall come forth from you. And I will establish my covenant between me and you and your descendants after you throughout their generations for an everlasting covenant, to be God to you and to your descendants after you.”   (Genesis 17:4-7)

The Holy Apostle Paul connects God’s promise to Abraham to Jesus Christ, who fulfills the promise.

Now the promises were made to Abraham and to his offspring. It does not say, “And to offsprings,” referring to many; but, referring to one, “And to your offspring,” which is Christ.  (Galatians 3:16)

While Jesus Christ fulfills God’s promise to Abraham, St. Paul also points out that it is not to Abraham alone that God reckoned righteousness through faith, but to all of us who believe.  Thus from Abraham to the Church today there is a continuous and organic faith shared by all.

“… the promise may rest on grace and be guaranteed to all his descendants—not only to the adherents of the law but also to those who share the faith of Abraham, for he is the father of us all, as it is written, “I have made you the father of many nations” —in the presence of the God in whom he believed, who gives life to the dead and calls into existence the things that do not exist. In hope he believed against hope, that he should become the father of many nations; as he had been told, “So shall your descendants be.” He did not weaken in faith when he considered his own body, which was as good as dead because he was about a hundred years old, or when he considered the barrenness of Sarah’s womb. No distrust made him waver concerning the promise of God, but he grew strong in his faith as he gave glory to God, fully convinced that God was able to do what he had promised. That is why his faith was “reckoned to him as righteousness.”  But the words, “it was reckoned to him,” were written not for his sake alone, but for ours also. It will be reckoned to us who believe in him that raised from the dead Jesus our Lord, who was put to death for our trespasses and raised for our justification.”  (Romans 4:16-25)

From the time of the Patriarch Abraham (about 2000BC) until now, 2000 years after the time of Christ, there have been a succession of men and women who shared Abraham’s faith in God.   On the Sunday before the Nativity of Christ, in the Orthodox Church we honor all of those faithful men and women who are in the ancestry of Christ.  They believed before the Messiah, remaining faithful to the prophecies and promises of God.  So we read in Hebrews 11:9-40:

By faith Abraham sojourned in the land of promise as in a foreign country, dwelling in tents with Isaac and Jacob, the heirs with him of the same promise; for he waited for the city which has foundations, whose builder and maker is God. By faith Abraham, when he was tested, offered up Isaac, and he who had received the promises offered up his only begotten son, of whom it was said, “In Isaac your seed shall be called,” accounting that God was able to raise him up, even from the dead, from which he also received him in a figurative sense. 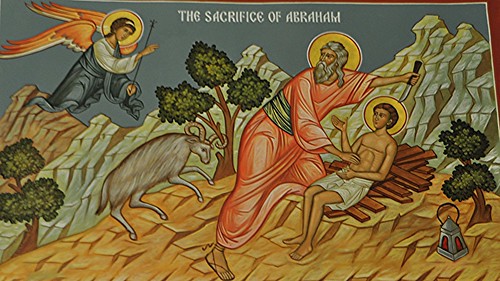 By faith Isaac blessed Jacob and Esau concerning things to come. By faith Jacob, when he was dying, blessed each of the sons of Joseph, and worshiped, leaning on the top of his staff. By faith Joseph, when he was dying, made mention of the departure of the children of Israel, and gave instructions concerning his bones. By faith Moses, when he was born, was hidden three months by his parents, because they saw he was a beautiful child; and they were not afraid of the king’s command. And what more shall I say? For the time would fail me to tell of Gideon and Barak and Samson and Jephthah, also of David and Samuel and the prophets: who through faith subdued kingdoms, worked righteousness, obtained promises, stopped the mouths of lions, quenched the violence of fire, escaped the edge of the sword, out of weakness were made strong, became valiant in battle, turned to flight the armies of the aliens. Women received their dead raised to life again. And others were tortured, not accepting deliverance, that they might obtain a better resurrection. Still others had trial of mocking and scourging, yes, and of chains and imprisonment. They were stoned, were sawn in two, were tempted, were slain with the sword. They wandered about in sheepskins and goatskins, being destitute, afflicted, tormented; of whom the world was not worthy. They wandered in deserts and mountains, in dens and caves of the earth. And all these, having obtained a good testimony through faith, did not receive the promise, God having provided something better for us, that they should not be made perfect apart from us.

Abraham, the man whose faith is reckoned as righteousness, is thus connected to Jesus who brings righteousness to all the faithful.  The Nativity of Christ is the celebration of the fulfillment of the faith and righteousness of Father Abraham.  We proclaim in the Gospel of St. MATTHEW 1:1-25: 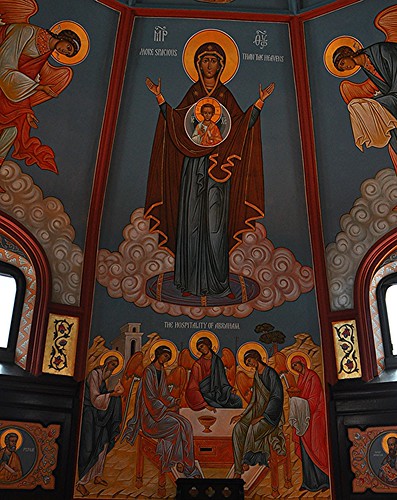 At Christmas we celebrate the faith of Abraham, the birth of the Messiah, and life in the Kingdom which is to come.