“Christ went down into the water, not to cleanse Himself but symbolically to drown the old man. By His submission, He symbolically re-enacted the Flood that drowned the world in Noah’s time, and also the drowning of Pharaoh and his Egyptian army in the Red Sea. In the flood that covered the whole world, sinful humanity was drowned. In the Red Sea, Pharaoh the enemy of the living God was drowned.

Christ took the sins of men on Himself. He voluntarily took on Himself the fate of the drowned Pharaoh, the enemy of the living God. He allowed the water to engulf His body as though he were burying it in the tomb. He allowed the water to flow over Him for a moment, and then stood up and came out of the water. By this, He repeated that terrible lesson that God gave to men by the drowning of sinners in the time of Noah and that of Pharaoh in the Red Sea. By this He, visible but silent, said that which He later says in words to the learned Prince Nicodemus: ‘Except a man be born again, he cannot see the Kingdom of God’ (John 3:3). But only he can be born again in this life who has died to the old man; or, in other words, in whom the old, sinful man is dead. He who immerses himself with his sins in the water comes up cleansed of sin. He who submits his body, as a bodily man, comes up by the Spirit as a spiritual man. He who buries himself with Christ by baptism, as in the grave, rises with Christ in His Resurrection (cf. Colossians 2:12). He who drowns pride, disobedience, selfishness and all the impurity of the old, sinful man will come out of the water with humility, meekness, obedience and love. He who dies to self will live to God (cf. Romans 6:3-8). In brief, he who is buried as a sinner and is born again as a righteous man will make this his own example that Christ gave by His baptism in the Jordan. 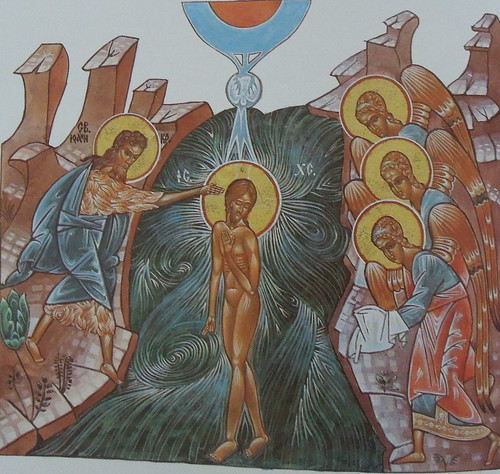 ‘Before a new life is begun, the old must be finished with’, says St. Basil the Great. Oh, how deeply significant and instructive is Christ’s baptism by His submitting His holy body to the water! Only God’s boundless wisdom was able to work a dispensation so helpful and instructive to men as the baptism in the Jordan. Only this boundless wisdom, that sees both the past and the future as it does the present, was able to link the beginning of human history with its end, and bring together the flood that drowned sinful humankind with Christ’s going down into the water. Only this inexpressible wisdom can in one image, one sign, say more than all the human tongues on earth. Because the whole path of our salvation was expressed in the act of Christ’s baptism in the Jordan.” (St. Nikolai Velimirovic, Homilies, pp 79-80)