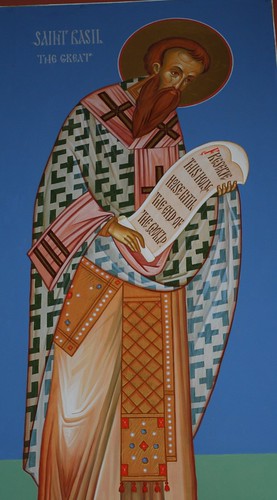 “It’s rare to hear a rip-roaring Sunday sermon about the temptations of the five-course meal and the all-you-can-eat buffet, or to hear a high profile pastor who addresses the sin of greed in the frank manner of, say, Saint Basil the Great in the fourth century A.D.:

The bread that you possess belongs to the hungry. The clothes that you store in boxes, belong to the naked. The shoes rotting by you, belong to the bare-foot. The money you hide belongs to anyone in need. You wrong as many people as you can help.

Note that Basil isn’t arguing for a slightly higher marginal tax rate to fund modest improvements in public services. He’s passing judgment on individual sins and calling for individual repentance. There are conservative Christians today who seem terrified of even remotely criticizing Wall Street tycoons and high-finance buccaneers, lest such criticism be interpreted as an endorsement of the Democratic Party’s political agenda. But a Christianity that cannot use the language of Basil – and of Jesus – to attack the cult of Mammon will inevitably be less persuasive when the time comes to attack the cult of Dionysus. In much the same way, the Christian case for fidelity and chastity will inevitable seem partial and hypocritical if it trains most of its attention on the minority of cases – on homosexual wedlock and the slippery slope to polygamy beyond. It is the heterosexual divorce rate, the heterosexual retreat from marriage, and the heterosexual out-of-wedlock birthrate that should command the most attention from Christian moralists. The Christian perspective on gay sex only makes sense in light of the Christian perspective on straight sex, and in a culture that has made heterosexual desire the measure of all things, asking gays alone to conform their lives to a hard teaching will inevitably seem like a form of bigotry.” (Ross Douthat, Bad Religion, pp 289-290)