“We can never know how many souls have fallen into this snare of the devil – carried away by the intensity of their foolish zeal, in their excessive discipline of their bodies going beyond what they are able to bear, suffering in self-torment of their own invention, and becoming the laughingstock of evil demons! Note that this would never have happened if they had followed good judgment and advice, and had not forgotten that bodily discipline, though admirable and fruitful where there is sufficient strength of the body and humility of the soul, must always be controlled by good sense and used only as a means to spiritual progress. The discipline of the body must never become an aim in itself, and indeed ascetic practices must sometimes be reduced, sometimes increased, sometimes changed, and sometimes stopped altogether for a time.

Those who cannot be as strict with themselves as some of the saints – not carry out as strong ascetic practices – can imitate their lives in other ways. They can arouse and establish good dispositions in their hearts, acquire the habit of fervent prayer, wage unrelenting war against thoughts and desires inspired by the passions, protect the purity of their hearts, love silence and solitude, be humble and meek with all people, do good to those who have caused them suffering, and guard themselves against all evil, however insignificant. 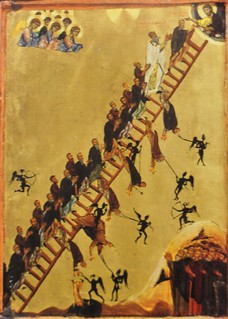 All these righteous activities of heart are more pleasing to God than excessive accomplishments of subduing, controlling, and putting down the flesh – especially when the latter are not required by our moral condition. We must use good judgment in undertaking tasks of physical asceticism when they are needed for our spiritual gain. First, avoid launching out with lofty standards, but rather begin at the bottom. It is better to climb up gradually than to suddenly undertake something lofty and be forced to climb down to a more realistic level (to your shame). ”