It is the resurrection of Christ which brings His disciples to understand there is a first Adam, a flesh and blood human, and a last Adam, Christ who is the first firsts of a new creation (1 Corinthians 15:42-50). The first Adam created to have dominion over the earth became dominated by death. The second Adam, the new man, Jesus Christ, used His own death to destroy death and establish his lordship over the living and the dead. 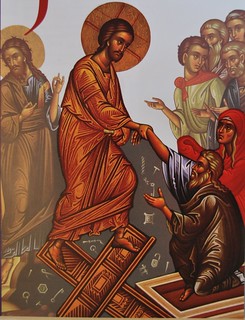 “The resurrection of Christ, therefore, opens up a whole new reality of existence, equivalent to the existence which Adam represents. In the event, Adam’s sin has been an existence dominated by sin and death. In contrast, the existence embodied by the resurrected Christ is one where death has expended its sting and is now stingless (1 Cor 15.54-57). Between them Adam and Christ span the whole history from ‘first’ to ‘last.’ But where the effectiveness of the first is marked by universal death, the effectiveness of the last really begins from Christ’s resurrection.“   (James Dunn, THE THEOLOGY OF PAUL THE APOSTLE, p 242)