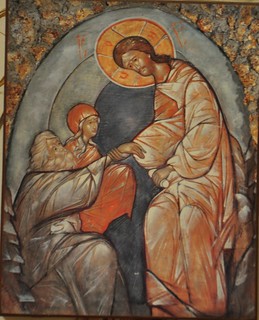 “The Greek word for salvation, soteria, has two possible etymologies, which give rise to tow different nuances of meaning.

According to the first etymology, the word comes from the ancient Greek verb saoo/soo, which later became sozo, meaning I make something sound … I bring it to its wholeness, its integrity.

The second etymology derives the word from the noun soter, which indicates the agent of the verb sozein, whereupon soteria is the action or the result of this agency, deliverance, or liberation from some threat, from a difficult situation, danger, or disaster.”   (Christos Yannaras, AGAINST RELIGION, p 63)

In Orthodoxy, we celebrate both meanings of the word salvation. Christ saves, liberates, delivers us from the power of sin and death. In raising humanity from the dead, Christ restores us to wholeness, gives us health by uniting us to divinity.

Christ is Risen!   Truly, He is Risen!