St Basil the Great (d. 379AD), whose liturgy we celebrate on the Sundays of Great Lent, says humans were driven from paradise by Satan and it is only in connection with Satan that humans encounter mortality.

“… our ancient home … from which the man-slaying demon drove us, selling mankind into slavery by his allurements, here, I say, you will see the first origin of man and death, which immediately seized upon us and which had been begotten by sin…”

Sin leads to death, and it is death which spread to all humanity (Romans 5:12). However, in the resurrection we find ourselves saved by God who created us and loves us. We again encounter the many dimensions of salvation.

“Now, what is the difference between being saved and being delivered? Properly speaking, those who are weak need safety, but those who are held in captivity need deliverance.”   (EXEGETIC HOMILIES, pp 84, 167) 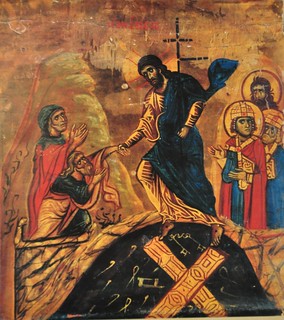 Humanity weakened by sin and by separation from God needs the safety of God to protect us from the ravages of sin and death. Salvation is God freely giving us this safety from destruction. Salvation is also God delivering us from captivity in Hades, where Death and Satan held us captive. Christ descends into death and raises the dead by His own resurrection.