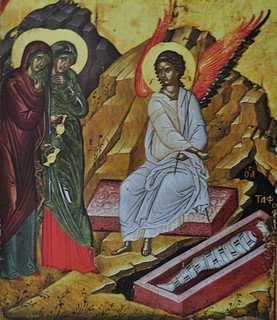 One aspect of the Gospel stories which tend to make me believe they are conveying events rather than contriving events is the women disciples of the Lord go to His tomb not to see if in fact Jesus had risen from the dead but to anoint his corpse in a more proper burial than they apparently believe He had on the day He died.  News of the resurrection is totally unexpected by them and they don’t know totally how to process the information.

Their response to finding Christ’s tomb empty is also not an immediate, “He is risen!”, but rather dismay that grave robbers apparently had beaten them to the tomb and stolen His body.  They can’t imagine what else the empty tomb would mean, nor what robbers would want with a corpse.   One of the hymns from Matins from the Sunday of the Myrrhbearing Women commemorates their confusion and looking for some kind of hope in the empty tomb.  All they want is His dead body, they are not yet believing in the resurrection of the dead.

The Myrrhbearing Women reached Your tomb and saw the seals of the tomb broken.

Not finding Your most pure body, they lamented, saying: “Who has stolen our hope?

Who has taken the dead One, naked and anointed, the sole consolation of His Mother?

How can the Life of the dead have died?  How can the Capturer of hell have been buried?

But arise in three days as You said, O Savior, and save our souls!” 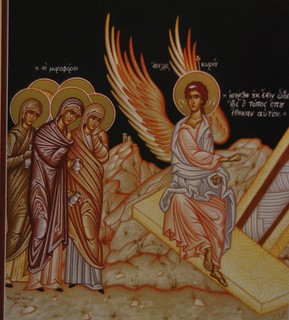 The empty tomb is evidence, “science”, rational proof of something: the body of Christ is no longer there.   The Myrrhbearing Women however cannot discern the meaning, the full truth from the evidence right before their eyes.    Their rational thinking leads them to conclude that body snatchers were at work.  Evidence and rational thinking are not enough to understand what they see.  They are far from the truth.  Pure rationalism does not help the women understand what the evidence is telling them.  The missing piece of the puzzle is faith.  They must remember the words that the Lord Jesus taught them, and they must believe in Him and believe what He taught.   To see the empty tomb as an act of God and not of men, they have to have faith.  Another hymn from Matins for the Myrrhbearers states:

The Myrrhbearers came early to Your tomb, O Christ, seeking You to anoint Your most pure Body.

Enlightened by the Angel’s words,  they proclaimed joyous tidings to the Apostles:

“The Leader of our salvation has been raised; He has captured death,

The empty tomb in itself does not enlighten the Women Disciples of the Lord – they neither understand what the empty tomb means nor do they believe in the resurrection.  They did not go to the tomb looking for an act of God, and could not see the evidence before them as testifying to the truth.   It is the angel who explains the evidence to them, who brings them to faith in Christ.  They stop looking for a human explanation for the evidence, and begin to see the events in the light of the teaching of their and our Lord.