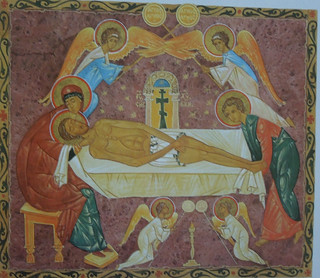 St. Cyril of Jerusalem (d. 386AD) offers to the newly baptized Christians an explanation of what they had experienced through the Paschal services and their own baptisms.

“After this you were led to the holy pool of the divine baptism, as Christ was carried from the cross to the sepulcher that is before our eyes. Each of you was asked whether he believed in the name of the Father, and of the Son, and of the Holy Spirit, and you made this confession and descended into the water three times, and ascended again; here again quietly pointing by way of a figure to the burial of Christ for three days. For as our Saviour passed three days and nights in the heart of the earth, so you in your first coming out of water represented the first day of Christ under the earth, and by your descent, the night; for as he who is the night sees no more, but he who is in the day stays in the lights, so in descending you saw nothing, as in the night, but in coming up again you were as in the day. At one and the same moment you died and were born; the water of salvation was your grave and your mother at once. What Solomon spoke of others may be applied to you. He said: ‘There is a time to bear and a time to die’ (Eccles. 3:2); but to you on the other hand the time of death is also the time to be born. 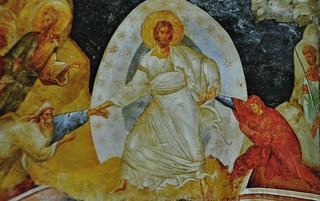 One and the same season brings both of these about; and your birth and your death go hand in hand. O what a strange and inconceivable thing it is! We did not really die, we were not really buried; we were not crucified and raised again; our imitation of Christ was but in a figure, while our salvation is truth. Christ actually was crucified and buried, and truly rose again; and all these things have been transmitted to us, that we might by imitation participate in his sufferings, and so gain salvation in truth.” (The Time of the Spirit: Readings Through the Christian Year, p 90)