The Gospel lesson of the healing of the paralytic from John 5:1-15 is reading in the post-Paschal season as a further meditation on what it means to be baptized into Christ.   Great Lent is the time period in the Church for preparing catechumens for baptism.  Pascha is the celebration of Christ’s resurrection which is experienced by the new converts to Christianity in their baptisms.  The weeks after Pascha are a time to reflect on what it means to be baptized and to live a new life in Christ.  The Gospel lesson of the paralytic reads: 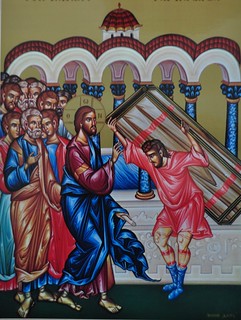 After this there was a feast of the Jews, and Jesus went up to Jerusalem. Now there is in Jerusalem by the Sheep Gate a pool, in Hebrew called Bethzatha, which has five porticoes. In these lay a multitude of invalids, blind, lame, paralyzed. One man was there, who had been ill for thirty-eight years. When Jesus saw him and knew that he had been lying there a long time, he said to him, “Do you want to be healed?” The sick man answered him, “Sir, I have no man to put me into the pool when the water is troubled, and while I am going another steps down before me.” Jesus said to him, “Rise, take up your pallet, and walk.” And at once the man was healed, and he took up his pallet and walked. Now that day was the Sabbath. So the Jews said to the man who was cured, “It is the   Sabbath, it is not lawful for you to carry your pallet.” But he answered them, “The man who healed me said to me, ‘Take up your pallet, and walk.’” They asked him, “Who is the man who said to you, ‘Take up your pallet, and walk’?” Now the man who had been healed did not know who it was, for Jesus had withdrawn, as there was a crowd in the place.  Afterward, Jesus found him in the temple, and said to him, “See, you are well! Sin no more, that nothing worse befall you.” The man went away and told the Jews that it was Jesus who had healed him.

The above passage from John’s Gospel presents us a startling image.  Jesus enters Jerusalem, God’s Holy City.  The only city on earth where God’s temple existed was the sign of God’s dwelling on earth.   The temple was the sign of God’s presence with His people.  And yet, in the city of God, in the city of God’s covenant, where God’s blessings upon His chosen people should have been most obvious, something was terribly wrong.  For here in the city God loves are droves of sick, blind, lame and invalids of all kinds.  Should it not be true that in the place where God dwells with His people, sickness, sorry and sighing should flee?  Should not these people all be blessed and living in an earthly paradise?   But this Jerusalem into which Christ entered was not heavenly.

The sick, infirm and invalids were all signs that something was wrong with God’s people.  Jerusalem was no different than any other city – filled with poverty and disease.  All signs that the covenant in fact was not being lived by the chosen people.  The suffering of the people is a sign that they are not obeying God.

Amidst the swarm of suffering people, Christ sees one man who had been infirm for ages, wallowing in self-pity and hopelessness.  Jesus asks him, “Do you want to be well?”

The question seems a bit strange, but as the story unfolds we come to realize Christ is really asking the man, “Are you willing to obey God?”  For obedience to God is the terms of the covenant to receive the blessings God promises (see for example Leviticus 26 and Deuteronomy 8).  It is only obedience to God that can bring about wholeness and health and humanity. 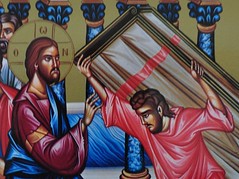 So Christ, the son of God, commands the paralytic to get up, and to lift and carry his bed  and then to walk.  This paralytic has to decide, will he attempt to obey this man commanding him?  Is the man speaking to him crazy?  How can he, a paralytic, walk, let alone carry his bed?   And even if he obeys, he will be lifting his bed on the Sabbath, which according to tradition is forbidden work on the Sabbath.   What should he do?

He obeys Christ and finds Himself able to lift his bed and to walk.  His healing is surely a sign that he is now living in obedience to God!  And while he is overjoyed, he immediately finds himself in conflict with the religious establishment who point out he is doing forbidden work.   But the healed man says the man who healed me COMMANDED me to do this.  I simply obeyed and now I experience the blessing of the Lord.  My infirmity is gone.

His interlocutors do not see a blessing from God.  They want to know who commanded the paralytic to break the Sabbath – they don’t even ask who healed him.  They completely miss the sign right in front of them and fail to  observe that God’s promised blessings are present.     Little do they care about God’s blessings and presence and promises, because they can’t see them!  They aren’t looking for God’s commands but are mostly witch-hunting for those who break the commandments.

This paralytic who obeyed the voice of God when Christ commanded him, now is faced with a lifetime choice.  He experienced the blessing of obeying God: his illness disappears and he is restored to health!  So now, will he choose to live a life of loyal service to God?

Christ gives him precisely that commandment: “Sin no more!”

The man is tested again.  He was told to get up and walk.  He obeyed what must have seemed like an impossible command.  He hears the same voice of Christ with a second command: “Sin no more!”   Is this commandment as impossible as the first?  Which is easier to command: a paralytic to walk or a healed man to sin no more? 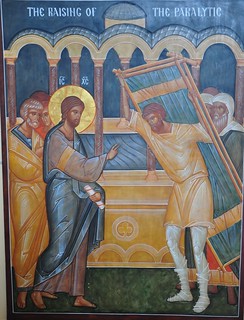 All who have been baptized into Christ have obeyed His command that we be born again of water and of the Spirit.   Now, we who have been spiritually made whole and fully human in Christ, can we obey His commandment to cease sinning?

Today we aren’t obsessed with obeying God’s commandments as those Jews were at the time of Christ.  We are however very interested in the blessings of God in this world.  We want that magic which heals us or blesses us in any and every way.  The difficulty is the same one that the paralytic who was healed faced:  are we willing to obey God and sin no more?

See also: The Healing of Soul and Body

Next:  God Does Not Despise the Brokenhearted