The Assembly of Canonical Orthodox Bishops of the United States of America has designated the Sixth Sunday of Pascha, Sunday, 17 May 2015, to be Orthodox Christian Prison Ministry (OCPM) Awareness Sunday in all parishes.   St. John Chrysostom  (d. 407AD) in a sermon offered these comments about doing prison ministry: 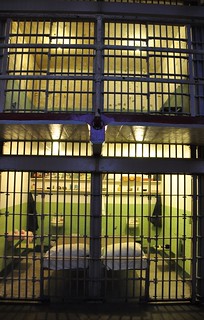 “Let us not, then, neglect to practice deeds of this kind and to live such a way of life.  Even if we should be unable to bring in food or to help by giving money, we still can cheer the prisoners by our words and hearten the soul that is discouraged, and assist in many other ways: for example, by conversing with the jailers, and making the guards more kind.  In fine, we shall accomplish some Good, whether little or great.

Moreover, if you say that there are not estimable, or upright, or well-mannered men in prison, but rather, murderers, and grave-robbers, and purse snatchers, and adulterers, and libertines, and men weighted down with many crimes, even by this observation  you are showing me the necessity for your visiting there.  For we have not been bidden to show mercy to the good, and to punish the wicked, but to show this kindliness to all.  Indeed, Scripture says, ‘Be as your Father in heaven who makes his sun to rise on the good and the evil, and sends rain on the just and the unjust.’ (Matt 5:45) 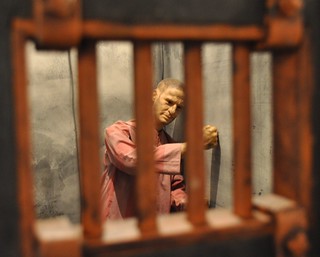 Well, then, do not bitterly denounce others, or be too severe a judge, but be gentle and kind.  We ought to be so for, even if we have not become adulterers, or grave-robbers, or purse-snatchers, we ourselves are guilty of innumerable other offenses that are deserving of punishment.  Perhaps we have often called our brother a fool, and this merits hell-fire for us (Matt 5:22).  Or we have looked upon women with unchaste glances, and this amounts to the committing of adultery (Matt 5:28).   Or, most serious of all, we have partaken unworthily of the Mysteries, and this makes us guilty of the Body and Blood of Christ (1 Cor 11:27).  Let us not then, be harsh judges of the rest, but let us reflect on our own guilt and thus we shall stop showing this merciless and cruel attitude.

Apart from this, we can also assert that even there we shall find many estimable men, who frequently are as good as anyone in the whole city.   Even that prison where Joseph was contained many criminals (Gen 39-41); nevertheless, that just man cared for the rest.  I say this for he was as good as anyone in the whole of Egypt; nevertheless, he lived in the prison, and no one of those in it knew him.  …

Besides, your Master also did not speak only to the just and flee from the impure.  On the contrary, He received even the Canaanite woman with much kindness, and also the Samaritan woman who was under a cloud, and impure besides (Mark 7:24-30; John 4:1-26).  Further, He received and restored to spiritual health another harlot, because of whom the Jews even reproached Him, and He allowed His feet to be washed by the tears of the impure woman, to teach us to show kindly attitude to those who are in sin (Luke 7:36-50).  Indeed, this is the essence of mercy.  … 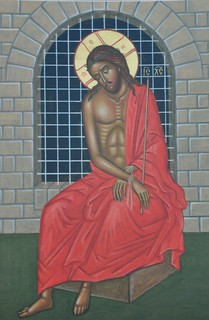 s there a murderer living in the prison?  Let us not, despite this, be faint-hearted in doing him good.  Is there a grave-robber or an adulterer?  Still, let  us take pity, not on their evil-doing, but on their misfortune.  And frequently, as I have said, one even will be found there who is superior to any number of men.  Moreover, if you continually visit those in prison you will not fail to come upon such a treasure.  Just as Abraham, in giving hospitality to any who chanced to come, once happened upon angels, so we also will at least happen upon great men if we do this good work.”