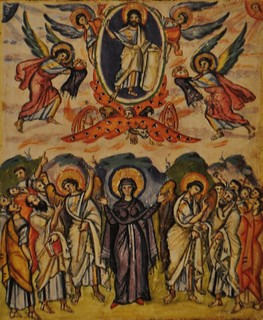 So when they had come together, they asked him, “Lord, will you at this time restore the kingdom to Israel?” He said to them, “It is not for you to know times or seasons which the Father has fixed by his own authority. But you shall receive power when the Holy Spirit has come upon you; and you shall be my witnesses in Jerusalem and in all Judea and Samaria and to the end of the earth.” And when he had said this, as they were looking on, he was lifted up, and a cloud took him out of their sight. And while they were gazing into heaven as he went, behold, two men stood by them in white robes, and said, “Men of Galilee, why do you stand looking into heaven? This Jesus, who was taken up from you into heaven, will come in the same way as you saw him go into heaven.” (Acts 1:6-11)

The Ascension of our Lord Jesus into heaven is an event with both a spiritual and physical dimension to it.  It appears that rather than seeing the heavens parted, Jesus disappears into a cloud.  A cloud frequently represents the presence of God in Old Testament events.  Theologian  Vigen Guroian comments: 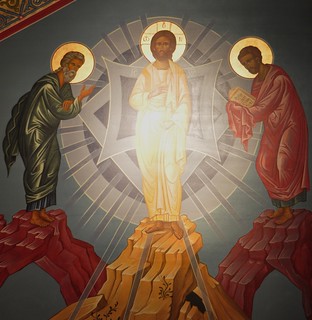 “The Liturgy invites us to read the Bible typologically, which leads us to see that the cloud on which Jesus descends at the Parousia is the same as the pillar of cloud in Exodus. This cloud is the symbol of God’s glory, a manifestation of the Holy Spirit, which makes the face of Moses shine on his descent from Sinai and causes Christ’s garments to glisten on Mount Tabor. The fire that melts the earth in its elements is the same that lights the burning bush and issues from Elijah’s heaven-bound chariot. It is also present in the flaming tongues that come to rest on the disciples at Pentecost.   To believe that the “cloud” is material and the “fire” is heat is as much a mistake as imagining that “the day of the Lord” is just an ordinary day in the course of linear time and human history.”  (The Melody of Faith: Theology in an Orthodox Key, Kindle Loc. 404-9)

One thought on “Christ’s Ascension into Heaven”