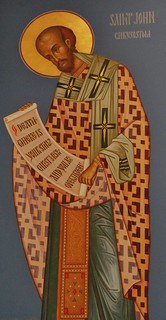 St. John Chrysostom (d. 407AD) in his sermon, “Afflictions of Man”, offers thoughts on why the saints of God suffer.   One might think that surely the saints, favored by God, would be spared normal human suffering.  Chrysostom, however, sees the suffering of saints as reminding us that they were human like us, not super-humans.   They are models of human behavior, not heroic gods.   Besides all of this, their suffering belies any criticism that the real goal of the saints was to be blessed by God in their earthly life.   The saints are not holy in order to benefit themselves in this world.

“The repeated bodily infirmities suffered by the Saints and the many temptation to which they were subjected should convince us that they were persons like us, advancing not through their own power, but through the grace of God. But the fact that they suffered by the laws of human nature prevented them from being treated by those around them as something other than normal humans, whose examples might be followed by other mortals. The affliction of the Saints also served to contradict those who claimed that their service to God was motivated by a promise of earthly prosperity. The experience of Job demonstrates this. The devil insinuated that Job was a paragon of virtue because he wished to retain the great wealth and happiness he and his family enjoyed. God then stripped Job of his belongings and subjected him to the most grievous disease and sorrow. Then He responded to the devil: ‘Job yet holds fast to his integrity.’ Because the Saints desired only to serve God, that service – in the midst of all travail, was reward enough.” (O Logos Publications, pp 5-6)