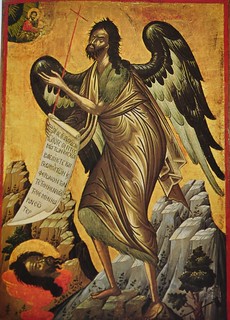 “At the time of prayer, when a person’s mind is collected and all the sense are brought into harmony, an encounter between God and the person praying takes place. This explains why all spiritual gifts and all mystical visions have been given to the saints at the time of prayer. It was during prayer that an angel appeared to Zacharias and announced the conception of John the Baptist, it was during the prayer of the sixth hour that Peter beheld the divine vision; it was while Cornelius the Centurion prayed that an angel appeared to him.

‘When the High Priest once a year, during the dread time of prayer, entered the Holy of Holies and cast himself down upon his face,…he heard the oracles of God through an awesome and ineffable revelation. O how awesome was the mystery which was ministered in this ceremony! So also at the time of prayer were all visions and revelations made manifest to the saints. For what other time is so holy, and by its sanctity so apt for the reception of gifts, as the time of prayer, wherein a man converses with God? At this time, when we make our petitions and our supplications to God, and we speak with him, a human being forcefully gathers together all the movements and deliberations of his soul and converses with God alone, and his heart is abundantly filled with God.’  – Isaac the Syrian” (Hilarion Alfeyev, The Spiritual World of Isaac the Syrian, p 145)