Sometimes emigres to a country see things about their new homeland that those born in the country cannot see.  Fr. Alexander Schmemann immigrated to America and found many things he loved about the USA.  He also could be insightfully critical about our culture.  In his journals he often reflected on America.  Here is one thought he penned:

“After so many hours spent watching television, I am quite impressed by this system that purges politics of that which would make it evil: hatred! This is the American miracle, whereas America’s lie, its original sin, is in its cult of riches and its denial of poverty. More precisely: happiness without wealth is impossible; happiness is identified with success. Thus, whatever is rhetorically said, in reality America does not respect the poor man, for his existence is shameful, fearful, like a secret disease. The very first basic myth, therefore, is the faith that each poor man can attain riches, ‘make himself rich.’ Now that this myth has collapsed, another myth has replaced the first: that society must make the poor wealthy, must provide for them, and the debate between Republican and Democrats consists only in how to do it.” (The Journals of Father Alexander Schmemann 1973-1983, p 132)

At least in Fr. Alexander’s eyes at that time, he somehow imagined American politics were free of hatred.  American politicians could bitterly disagree, but, at least in his mind, did not actively hate one another.  One has to wonder  whether he would have still held this view had he lived to our current political divide and polarity, in which hatred seems prevalent and malevolent in modern politics. 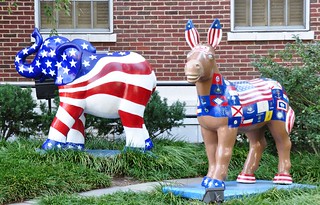 He, like many who come from outside the U.S., also do not always see the great divide between America’s right and left.  As he writes above, Fr. Alexander saw both Democrats and Republicans accepting the same basic premises.  The goals of the two parties are the same, their difference is not in the goals but only in how to achieve the goals.  Don’t know if he would have held that same view had he lived until today.  And despite how different the two parties might portray themselves to Americans, outside the U.S. many still do not see any real changes taking place in U.S. policy no matter which party comes to power.

The American mythology as Schmemann saw it was that everyone can lift themselves out of poverty into prosperity if they try hard enough.  He felt that myth was disproved and so a new thinking emerged that if people can’t lift themselves out of poverty, then the government must help lift them up.  His contention seems to be that as Jesus said, we will always have the poor with us.   What to do about that reality, is the painful question America must face.

What I learn from this is that sometimes in the midst of political debates one can realize that the solutions being proposed to a problem may limit the real discussion needed because they frame the question in a particular way which causes people to think they must chose between the two choices put before them, when it may be true that the wrong questions are being asked which in turn misshape the approach to a solution.

One thought on “Reflecting on America”