Today in the Orthodox Church we celebrate the Transfiguration of our Lord, reading the account from Matthew 17:1-9. 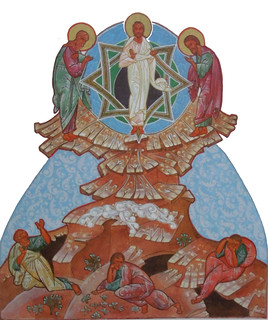 Six days later, Jesus took with him Peter and James and his brother John and led them up a high mountain, by themselves. And he was transfigured before them, and his face shone like the sun, and his clothes became dazzling white. Suddenly there appeared to them Moses and Elijah, talking with him. Then Peter said to Jesus, “Lord, it is good for us to be here; if you wish, I will make three dwellingshere, one for you, one for Moses, and one for Elijah.” While he was still speaking, suddenly a bright cloud overshadowed them, and from the cloud a voice said, “This is my Son, the Beloved; with him I am well pleased; listen to him!” When the disciples heard this, they fell to the ground and were overcome by fear. But Jesus came and touched them, saying, “Get up and do not be afraid.” And when they looked up, they saw no one except Jesus himself alone. As they were coming down the mountain, Jesus ordered them, “Tell no one about the vision until after the Son of Man has been raised from the dead.”

St. John Chrysostom (d. 407AD) reflects on the  Apostle Peter and his recorded reaction to experiencing the Transfiguration. 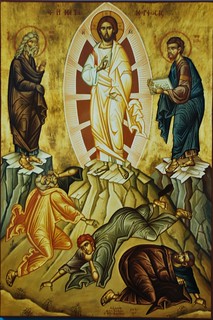 “What, then, does rash Peter say? ‘It is good for us to be here!’ For since he has heard that Jesus had to depart for Jerusalem and to suffer, but fears and trembles still for his sake, even after Jesus’ rebuke, he does not dare to approach him and say the same thing again, ‘Far be it from you!’ But speaking from that same fear, he again hints the same thing in different words. For since he saw the mountain, its great remoteness and its deserted character, he got the idea that there was a strong prospect of safety here, due to the place itself – and not just from the place, but from his never leaving it to go to Jerusalem. For he wanted Jesus to remain there always, that is why he mentions tents. For if this were to happen, he is saying, we shall not go up to Jerusalem, and if we do not go up, he will not die, it is there, after all, that he said the scribes would attack him. But he does not dare say this outright. Wanting to bring it about, however, he says with assurance, ‘It is good for us to be here,’ where Moses and Elijah are present: Elijah, who drew fire down on a mountaintop, and Moses, who entered into darkness to speak with God – no one will have any idea where we are![…] 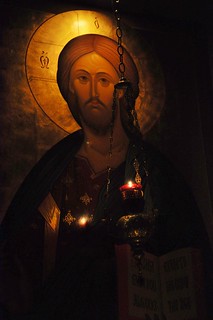 Then, to make clear that they were seized by great fear, both Peter and the others, Luke says: ‘They were heavy with sleep; and when they woke, they saw his glory.’ By ‘sleep’ here he means the heavy drowsiness that had come over them as a result of that vision. For they experienced something like what we feel, when our eyes are dimmed by overpowering brightness. It was not night, after all, but day; and the excess of splendor weighed down the weakness of their eyes.[…]And Peter said, ‘Let us build three tents,’ but Jesus himself revealed the tent not made by hands. Therefore we find earlier smoke and mist, but here ineffable light, and a voice.” (Light on The Mountain: Greek Patristic and Byzantine Homilies on the Transfiguration of the Lord, pp 74-77)

St. John Chrysostom portrays St. Peter as still trying to protect Christ from any threat of death.   Peter’s interest in staying on the mountain is that it is a safe place, and they are hidden from the world.  Chrysostom thinks Peter has learned his lesson from an earlier rebuke from Jesus, and so is wise enough not to say directly what he is thinking.  Peter wanted what many Christians wish – not to be struggling in a world which is hostile or in which there is suffering and sorrow.  Peter wishes to be in Paradise, but the Transfiguration occurs in this world and gives us the strong indication that Christ intended to save the world, not save us from the world.  We are called by Christ to be a light to the world, while still in the world rather than shining some spotlight down on earth from a safe heavenly place.  It is a much more difficult calling than simply becoming some angel in heaven.