One interesting question ponder is: What is the exact relationship between the mind and the brain?   It is a question for scientists, as well as philosophers and believers.  The materialist says the mind has no existence apart from the brain for it is merely a function of the material brain.  Philosophers and believers look beyond the material existence, to the existence of self or soul and what it means to be human.

The Fifth Century Christian author, St. Mark the Monk, reports on a conversation which deals with these very issues of the relationship between the physical and spiritual worlds.  Christians of the 5th Century were well aware that the desires and passions of the body often went against what a person willed to do by choice.  That spiritual warfare is obvious to anyone who attempts to practice self denial or self control.  The ability to exert self control was often thought to be a hallmark of the human being who was not guided by animal instinct but had free will.

The attorney then asked, “Does the flesh have will apart from thought?”

The monk answered, “It does, in accordance with what the Apostle says: ‘We ourselves were once disobedient, doing the will of the flesh’ [Titus 3.3; Eph 2.3], and again, ‘What the flesh desires is opposed to the Spirit, and what the Spirit desires is opposed to the flesh’ [Gal 5.17]. So, you see, the flesh has desire and will, and we are ignorant of this fact on account of the carelessness and assent of our thoughts. Because of this fact, not only those who neglect prayer, but also those who do not pay heed to their thoughts are injured.  (Counsels on the Spiritual Life, Kindle Location 4523-4529)

What was obvious is that apart from the mind or the self, the body has a will of its own, which the goal of the Christian life was to control.  We are always trying to exert our spiritual will to govern the body, rather than having bodily urges control the person.  The mind in this worldview is not identical to the physical brain and the rest of the human body.  The body is capable of creating desires which might go against what the mind wants to do.

In a more recent book, Dr. Clark Elliott (The Ghost in My Brain: How a Concussion Stole My Life and How the New Science of Brain Plasticity Helped Me Get it Back), writes about his personal experience with brain trauma and the effect it had on his life.  In the book he describes the effect the brain trauma had on his spiritual life and reflects exactly on the relationship of the brain to the self and one’s spiritual life.   To be honest I didn’t find the whole book that compelling a read, but I did find this one section interesting.

DIALOGUE WITH GOD AND THE MATTER OF SENTIENCE.

Since my very early teens, I’ve had the sense of a dialogue with God. Though I did not grow up religious, praying was easy for me. I talked to God, and God listened. God talked to me (in pictures, and through intuition), and I listened. Dialogue with the spirit was easy and natural: comforting, occasionally demanding, real. Almost immediately following the crash, this dialogue disappeared. I recall very distinctly entering the small chapel at DePaul’s downtown university campus, sitting alone on one of the chairs to pray for my students, and for my ability to serve them as their professor—something I often did. In a profoundly disturbing moment I realized that there was no longer anyone there. No one was listening. I thought: These are just empty words I am saying to myself. My prayers are no different than if I were reading aloud from an auto repair manual. I felt a deep sense of loss, but in a weird way. Though I understood, intellectually, about the loss of dialogue with God, and I felt quite disturbed about how sterile my life had become because of it, I nonetheless couldn’t quite “see” what was missing. It was like trying to remember a dream. I still believed in God, but viscerally it was an entirely different experience: there was no longer anyone there. When we consider the nature of my later recovery, and the many examples we’ve seen of how our internal world is so very symbolic in nature, it becomes apparent that it was the loss of my visual/spatial ability to represent symbolic relationship that was at the heart of my troubles with God. If so, then losing the closeness to God I felt pre-concussion raises some interesting questions about our connection to the larger universe around us. Could this sense of connection be located entirely in one of the visual/spatial centers of our brains? After all, in my case I had this easy faith up until the moment of the crash. I lost it in the days after the crash. I didn’t have it for eight years. I got it back again after treatment for my concussion. This is pretty strong evidence that it is our brains—our physical brains—that support this kind of spiritual faith. What this means is still up for grabs, however. As scientists, we have to allow for at least two possibilities. On the one hand we could take this as evidence that a sense of God, and the spirit, is just an artifact of the neural, and possibly other, programming in our brains—a purely physical uprising from a locus in our heads. Certainly there are researchers who talk about the “God spot” in the parietal, and other, regions of the brain that are thought to give rise to spirituality. Some have even have claimed to have created a “God Helmet” that artificially stimulates a profound religious experience via artificial manipulation of the brain.* On the other hand, we could just as easily imagine that these parts of the brain allow us to connect to a real channel of spirituality, and that without them we have simply lost one dimension of our sensory capabilities. That is, if we lose our hearing, the world is still full of sound; in the same way, if we lose our sense of God, that doesn’t mean that God is not still out there.     ( Kindle Location 1350-1373) 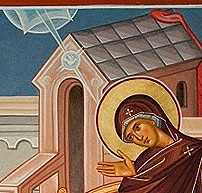 Obviously the mind and the brain, or the self and the brain, have a relationship.  One enters into relationships in and through one’s physical body.  And yet, we believe that the self is not identical to the body.  The self can have a relationship with God, using the body as a means of voicing prayer and of physically moving one’s body to correspond to one’s prayer and thoughts as in bowing in repentance.  The soul comes into existence when the breath of the Spirit enters into the physical dust of the earth to cause into being a living soul.  Acts of the Holy Spirit, touching a human will register in the brain of a person.  The physical and spiritual are not in opposition to one another but rather are united in the human being.