Today we celebrate the birth of our Lord’s Mother, the Theotokos and Ever-Virgin Mary.   I wish a blessed feast to all.   St. Gregory Palamas (d. 1439AD) writes about the Feast:

“This sacred feast and holiday that we are keeping is the first to commemorate our recall and re-creation according to grace, for on it all things began to be made new, enduring precepts began to be brought in instead of temporary ones, the spirit instead of the letter, the truth instead of shadows. Today a new world and a mysterious paradise have been revealed, in which and from a new Adam came into being, re-making the old Adam and renewing the universe. He is not led astray by the deceiver, but deceives him, and bestows freedom on those enslaved to sin through his treachery. 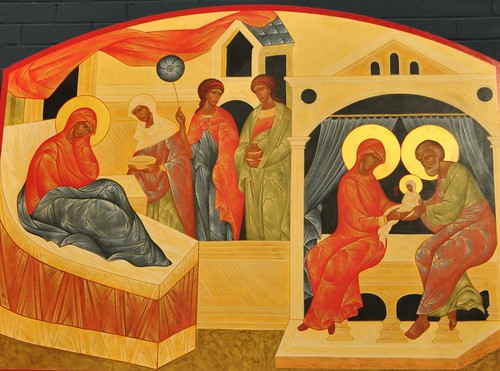 Today a paradoxical book has been made ready on earth, which in an indescribable way can hold, not the imprint of words, but the living Word Himself; not a word consisting of air, but the heavenly Word; not a word that perishes as soon as it is formed, but the Word who snatches those who draw near Him from perdition; not a word made by the movement of a man’s tongue, but the Word begotten of God the Father before all ages.[…]Thus Christ took sin’s prisoners to live with Him forever, justifying them by faith in Him, but He bound the prince of sin with inescapable bonds, and delivered him to eternal fire without light. 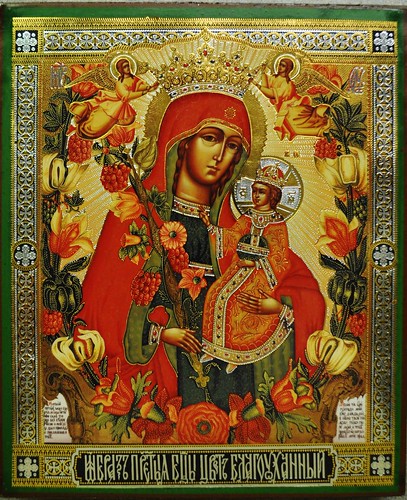 Today, as prophesied, out of the ‘stem of Jesse’, a rod has come forth (cf. Isa. 11:1), from which a flower has grown with knows no wilting. This rod recalls our human nature, which had withered and fallen away from the unfading garden of delight, makes it bloom again, grants it to flourish forever, brings it up to heaven, and leads it into paradise. With this rod the great Shepherd moves His human flock to eternal pastures, and supported by this rod, our nature lays aside its old age and feeble senility, and easily strides towards heaven, leaving the earth below for those who, devoid of support, are plunging downward. But who is the new world, the mysterious paradise, the paradoxical book, the inspired tabernacle and ark of God, the truth sprung up from the earthy, the much – extolled rod of Jesse? It is the Maiden who before and after childbearing is eternally virgin, whose birth from a barren mother we celebrate today.” (The Homilies, pp 334-335)