On the Sunday after the Feast of the Elevation of the Cross, we read the Gospel Lesson from Mark 8:34-9:1. 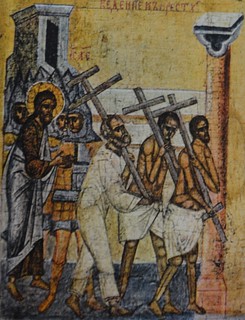 And the Lord called to him the multitude with his disciples, and said to them, “If any man would come after me, let him deny himself and take up his cross and follow me. For whoever would save his life will lose it; and whoever loses his life for my sake and the gospel’s will save it. For what does it profit a man, to gain the whole world and forfeit his life? For what can a man give in return for his life? For whoever is ashamed of me and of my words in this adulterous and sinful generation, of him will the Son of man also be ashamed, when he comes in the glory of his Father with the holy angels.” And he said to them, “Truly, I say to you, there are some standing here who will not taste death before they see that the kingdom of God has come with power.”

Some historians of the Orthodox liturgical tradition say that in the older tradition of the Church, this Gospel lesson was read as the beginning of the Church’s new year (see for example THE DIVINE LITURGY OF THE GREAT CHURCH by Fr. Paul 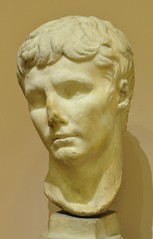 Harrilchak).  This was because in the early centuries of Christianity in the Roman Empire, September 23, Augustus Caesar’s birthday was treated as the first day of the new year.  He was heralded in the pagan Roman Empires as heralding in a new world.   Over the centuries, the Gospel lesson remained on the Sunday after the Elevation of the Cross, but it got separated from association with the church’s new year day as that day migrated away from September 23 to September 1.  This was somewhat a move to Christianize new year’s day.  Interestingly, August Caesar’s birthday also eventually became eclipsed in the Christian Roman Empire, being replaced on September 23 with the conception of St. John the Forerunner, who for Christians was the true herald of the coming new age of God.  Augustus represented nothing but the old age which was passing/had passed away.

Matthew Gallatin writes a personal reflection on what it means to deny the self to follow Christ:

“It wasn’t until I began studying the Orthodox faith, however, that I realized how subtly and completely self-love permeates my life. Sometimes it cleverly disguises itself in forms that are not quite so stark and ugly as self-love. When I am self-concerned, when I practice self-justification, when I act on self-desire, when I follow paths that are self-created and self-directed – in fact, any time the word ‘self’ can be used in the description of what I am doing – I am dancing to a dangerous drummer called self-love. Even things that are lauded in our society – like self-motivation, self-assertiveness, and self-development – can present deceptive stumbling blocks to one who in truth longs to ‘deny himself’ (Matt. 16:24) and allow himself to be caught up within the Life of his God and King.” (Thirsting for God in a Land of Shallow Wells, pp 95-96)