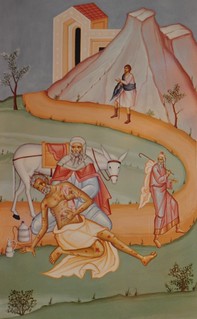 The Gospel lesson found in Luke 10:25-37 of Good Samaritan is a well known parable of Jesus. Jesus confronts the attitude that turns the Law (Torah) into legalistic rationalizations.   In the parable, Jesus turns the question he is asked, “Who is my neighbor?”, on its head, saying the real question is how can I be a neighbor to everyone I see?   Christ, whom the Orthodox would understand as the One whom Moses encounters when he receives the Law from God on Mount Sinai, reasserts Himself into Torah in this Gospel lesson saying it is the meaning of the Law which is important, not just having Torah as a set of rules which one keeps best by narrowly, legalistically and Pharisaically defining or measuring terms.  And Christ intends the Law to be one of love.  The emphasis in keeping Torah is love: for God and for neighbor.  Those who turn Torah into the means for parsing, measuring and legally defining, miss the weightier matter of the law which is love, not straining gnats. 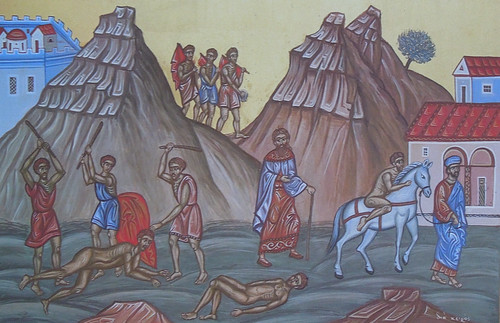 The right question is not who is my neighbor but to whom can I show mercy?  The answer, based in the love commanded by God in Torah, is each person one comes across in life.   So we read in the desert fathers the nature of true monasticism which is love for neighbor.  This is an asceticism we all can practice during the Nativity Fast as well as throughout life.

“The Fathers relate many anecdotes about Abba Agathon and the great love which he harbored in his heart for his fellow man. He once went down into the city to sell his baskets and happened upon an unfortunate man at the side of the road, ill and abandoned, whom, until that moment, not a single passer-by had deigned to help. The holy man got him up, attended to him, and, with the money from his baskets, rented a room and took him in. It is said that he remained there for some time with him and cared for him, while at the same time working to meet their expenses. Later, when the stranger became wholly well and was in good enough condition to return to his own country, Abba Agathon then returned to his beloved silence.” (Archimandrite Chyrsostomos, The Ancient Desert Fathers, p 30)