We Orthodox have entered into the Christmas season with the beginning of the Nativity Fast.   St. Gregory Palamas (d. 1439) offers us some thoughts on fasting and keeping a Lent which is pleasing to God:

“Fasting is a means and not an end in itself. The aim of fasting, as with all the means that the Church places at our disposal, is to help us to attain Christlike perfection and humility. And so it is possible to fast very strictly and yet not attain to such perfection. As St. John Cassian relates, in his On the Holy Fathers of Sketis, Abba Moses (c. 330 – c. 405) warns, ‘Fasts and vigils, the study of Scripture, renouncing possessions and everything worldly are not in themselves perfection…they are tools. For perfection…is acquired through them. It is useless, therefore, to boast of our fasting, vigils, poverty and reading of Scripture when we have not achieved the love of God and our fellow men’ (trans. from The Philokalia, op. cit., Vol. 1, p 96). Note also the advice that St. Symeon the Devout (9th – 10th cent.), in Catechetical Sermons, op. cit., XXI, 54-57: ‘Know this, my child, that neither fasting, nor vigil, nor physical toil, nor any other ascetic feat causes God to rejoice and appear to us, but only a humble, simple and good soul and heart.’” (The Homilies, pp 554-555)

Fr Dmitri Dudko (d. 2004) was an Orthodox priest during the communist reign in the Soviet Union.  He defied Soviet authority by preaching question and answer style sermons to teach the faithful the Gospel.  This eventually led to his arrest and imprisonment where he was forced by the KGB to renounce his activities for the Church.   He understood what it was to live in a place and time in which Christians were persecuted by the state.  Here are some words he spoke in a sermon before his imprisonment.  They are encouraging words to all Christians who feel threatened by changes in the world or by Islamic terrorists.   Despite our fears, we still need to witness to the Gospel and the resurrection.  The original disciples themselves hid in fear after Christ’s crucifixion.  Eventually, however, they went out into the world to proclaim the Gospel with all of them facing various torments and persecutions and executions.   Here are the words of Fr. Dmitri commenting on what Christ said to Mary Magdalene:

“‘Go to My brothers and tell them what you have seen and heard.’ What does this mean? Simply, that having recognized the risen Christ you can’t lock yourself up in your own private world. No one who tries to protect his faith by running away from all trials and tribulations knows Christ yet. Christ is the Savior of the world. He came to save each person. 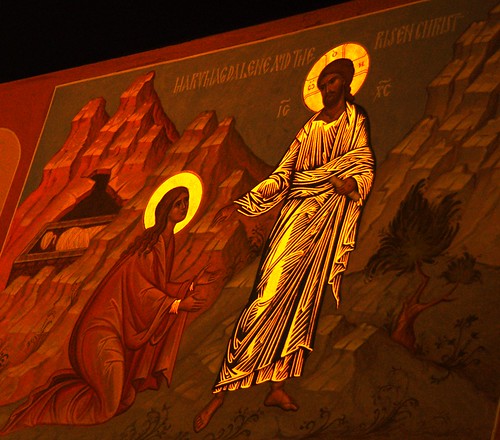 Knowing this, how can we not proclaim the risen Christ to the world? Can we look on calmly as people perish, not knowing Christ – some of these, moreover, being very gifted people who could do quite a bit? We see how people stumble about with no support, enduring their earthly trials? Why – out of personal fear – are we unable to give them support? Often we’re afraid to reach out a hand to those who don’t know God, thinking that in this way we are defending, protecting our faith, though in reality we are losing it. Could Mary have left the tomb without saying a thing to anyone? Could threats have made her be afraid? After all, threats are just amusing if you know that Christ is risen. What can our personal earthly well-being mean in the face of this fact? 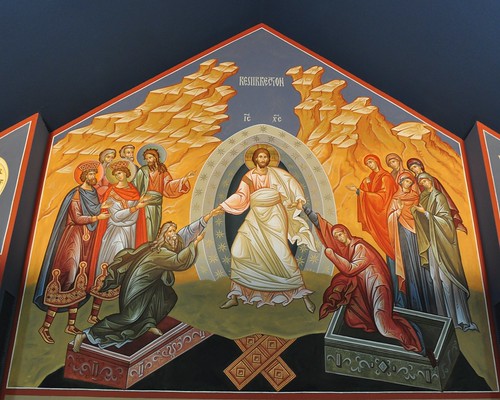 Anyone who knows the risen Christ has a heavy responsibility placed upon himself. He must bring to people the news of Christ’s resurrection, in whatever way he can and wherever destiny leads him If you’ve been with Mary to Christ’s tomb, if you’ve been convinced that it’s empty because Christ is risen, then go and tell everyone about it. Christ is risen! May God bless you and help you! Amen.”   (Our Hope, pp 291-292)

Like many Christians in history, Fr. Dmitri was eventually broken by threats of the KGB.  Feeling unable to endure the threats in imprisonment, he publicly denounced his activities on behalf of the Church.  After the fall of communism, humbled by his own humanness, he confessed his brokenness saying, “I thought if I didn’t agree, I wouldn’t live … Compared to the hell that I then brought into my soul, anything – even torture or execution – would have been easier to bear.”  He feared torture and death, but then found his heart and mind tortured by his choice to avoid further suffering by caving in to the KGB threats.  That he felt created a greater hell his heart than torture or execution ever would have. 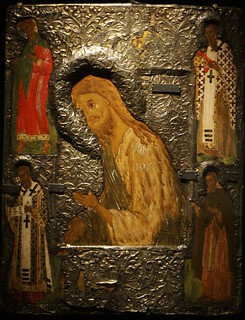 We Orthodox honor St. John the Baptist for his willingness to suffer for truth joyously.  May we each have that same spirit and remain faithful to the Gospel even in the face of threats or terror.