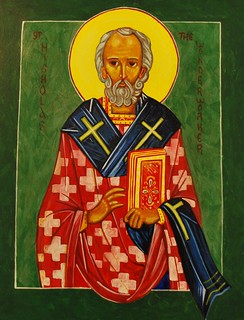 “Little is known for certain about the life of St. Nicolas, bishop of Myra in Lycia (Asia Minor). It is believed that he suffered imprisonment during the last major persecution of the Church under Diocletian in the early fourth century, and that he attended the first Ecumenical Council at Nicaea in 325. Christian tradition has come to regard him, in the words of an Orthodox hymn, as ‘an example of faith and an icon of gentleness.’ His place in the Church’s conscience is explained by a contemporary Russian Orthodox icon-painter, Leonid Ouspensky:

The quite exceptional veneration of St. Nicolas is well known. He is revered not only by Christians but often by Muslims. In the weekly liturgical cycle of the Orthodox Church, among the days of the week dedicated to the Savior and to different orders of heavenly and earthly sanctity, only three persons are singled out by name: the Mother of God, John the Forerunner and St. Nicolas. The reason for the special veneration of this bishop, who left neither theological works nor other writings, is evidently that the Church sees in him the personification of a shepherd – of one who protects and intercedes. 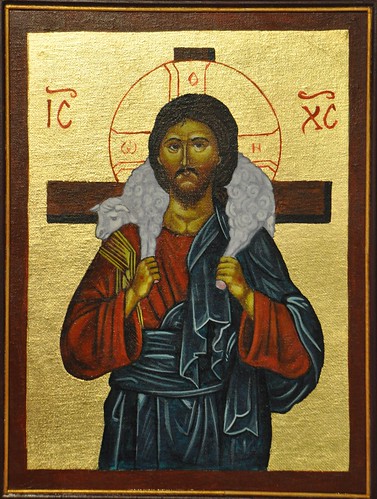 According to his Life, when St. Nicolas was raised to the dignity of bishop he said: ‘This office demands a different type of conduct, so that one may live no longer for oneself but for others.’ This ‘life for others’ is his characteristic feature and is manifested by the great variety of forms of his solicitude for men: his care for their preservation, their protection from the elements, from human injustice, from heresies and so forth. This solicitude was accompanied by numerous miracles both during his life and after his death. Indefatigable intercessor, steadfast, uncompromising fighter for Orthodoxy, he was meek and gentle in character and humble in spirit.” (The Time of the Spirit: Readings Through the Christian Year, Selected and edited by George Every, Richard Harries, Kallistos Ware, p 69) 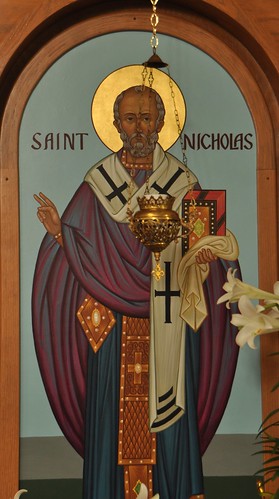