Now the tax collectors and sinners were all drawing near to hear him. And the Pharisees and the scribes murmured, saying, “This man receives sinners and eats with them.”  (Luke 15:1-2) 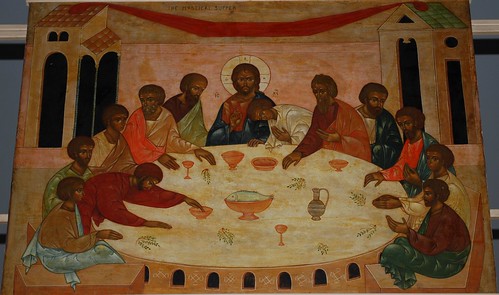 One aspect of the Heavenly Kingdom which Jesus modeled is the banquet to which everyone is invited – not just the righteous, but sinners as well.  Biblical scholar James D.G. Dunn notes:

“In his own ministry Jesus embodied this forgiveness and acceptance of the end-time kingdom, particularly in his table fellowship. These gatherings, from which Jesus excluded no one, even open sinners, expressed the heart of his message, for they were the foretaste of the messianic feast of the new age (Luke 14.13, 16-24). Hence Mark 2.17 – ‘I came not to invite the righteous (that is, to the wedding feast) but sinners’. So too his immediate band of disciples included two or three tax collectors and ex-prostitutes. This is why he was so disparagingly called ‘a friend of tax collectors and sinners’ (Matt. 11.19, Luke 7.34, Luke 15.1-19.7).”  (Unity and Diversity in the New Testament, p 16)

Despite Jesus’ embrace of all, welcoming them to His Messianic table, not everyone is willing to accept the hospitality of the Master.  So the Lord Jesus offered the following parable  in Luke 14:16-24.

Then Jesus said to him, “Someone gave a great dinner and invited many. At the time for the dinner he sent his slave to say to those who had been invited, ‘Come; for everything is ready now.’ But they all alike began to make excuses. The first said to him, ‘I have bought a piece of land, and I must go out and see it; please accept my regrets.’  Another said, ‘I have bought five yoke of oxen, and I am going to try them out; please accept my regrets.’ Another said, ‘I have just been married, and therefore I cannot come.’ So the slave returned and reported this to his master. 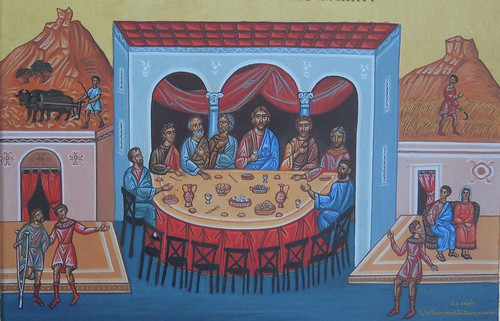 Then the owner of the house became angry and said to his slave, ‘Go out at once into the streets and lanes of the town and bring in the poor, the crippled, the blind, and the lame.’ And the slave said, ‘Sir, what you ordered has been done, and there is still room.’ Then the master said to the slave, ‘Go out into the roads and lanes, and compel people to come in, so that my house may be filled. For I tell you, none of those who were invited will taste my dinner.’”

The Gospel lesson of the messianic banquet has the originally invited guests all making excuses for why they won’t attend the banquet with the celebration offered to them.  In Orthodoxy we read this Gospel on the 2nd Sunday before Christmas.  We are reminded in the Nativity season that it is possible to reject the heavenly kingdom for very mundane reasons.

“In church today, however, we celebrate the forefathers, most of whom were Hebrews by race. For what reason? So that all of us may learn that the Hebrews were not disinherited nor the Gentiles adopted as sons in a way that was unjust, unreasonable or unworthy of God who did these things and made these changes. Rather, just as among those Gentiles who were called, only the obedient were chosen for kinship with God, so the race of Israel, and Adam’s descendants down to Israel’s time, were a great multitude, but only those among them who lived according to God’s will were true Israelites. To them the prophecies belonged, through them future events were prefigured, and to them the promises were given (cf. Rom. 3.1-4.13). Only these men were the true fathers and forefathers, firstly of her who in virginity bore Christ, who is God over all (Rom. 9.5), according to the flesh, and then, through Him, of ourselves. 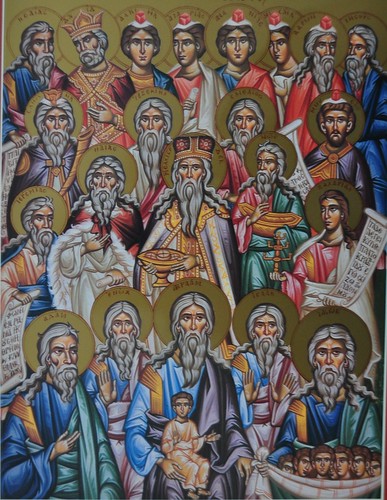 These fathers and forefathers were certainly not cast out of Christ’s Church, for they are publicly commemorated by us today as partakers of the fullness of the saints. For in Christ Jesus there is neither old nor new, ‘nor Greek, nor Jew, Barbarian, Scythian, bond nor free: but Christ is all and in all’ (Col. 3.11, cf. Gal. 3.28). In Him there is no Jew, which is one merely outwardly, neither is there any circumcision, which is outward, but he is a Jew, which is one inwardly; and circumcision is that of the heart, in the spirit, and not in the letter of the law (Rom. 2.28-29). All, old and new, who have been well-pleasing to God, and all who have led lives acceptable to God, either before the law, under the law or after the law in the gospel of grace, have this circumcision and are united by it (cf Rom. 4.10-12, Phil. 3.3, Col. 2.11).” (St. Gregory Palamas, The Homilies, pp 454-455) 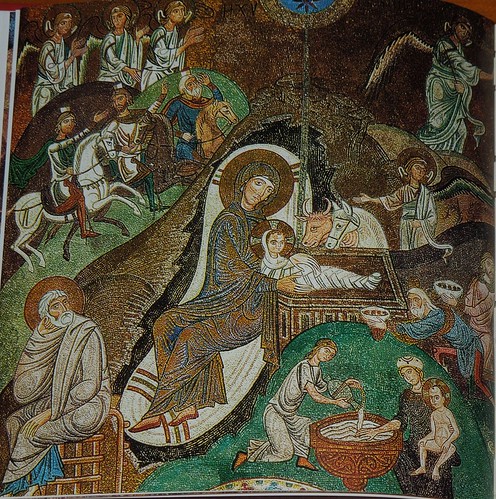