We remember the death of St. Herman of Alaska on December 13.  Here is one story from the life of St. Herman: 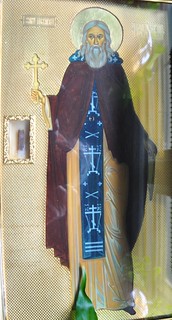 “Once the Elder (St. Herman) was invited aboard a frigate which came from St Petersburg. The Captain of the frigate was a highly educated man, who had been sent to America by order of the Emperor to make an inspection of all the colonies. There were more than twenty-five officers with the Captain, and they also were educated men. …  Father Herman gave them all one general question: ‘Gentlemen, what do you love above all, and what will each of you wish for your happiness?’ Various answers were offered … Some desired wealth, others glory, some a beautiful wife, and still others a beautiful ship he would captain; and so forth in the same vein. ‘It is not true,’ Father Herman said to them concerning this, ‘that all your various wishes can bring us to one conclusion—that each of you desires that which in his own understanding he considers the best, and which is most worthy of his love?’ They all answered, ‘Yes, that is so!’ He then continued, ‘Would you not say, is not that which is best, above all, and surpassing all, and that which by preference is most worthy of love, the very Lord, our Jesus Christ, who created us, adorned us with such ideals, gave life to all, sustains everything, nurtures and loves all, who is Himself Love and most beautiful of all men? Should we not then love God above every thing, desire Him more than anything, and search Him out?’ ” 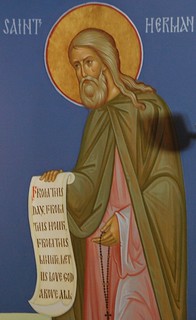 All said, “Why, yes! That’s self-evident!” Then the Elder asked, “But do you love God?” They all answered, “Certainly, we love God. How can we not love God?”  Father. Herman replied, “And I a sinner have been trying for more than forty years to love God, I cannot say that I love Him completely,” Father Herman protested to them. He then began to demonstrate to them the way in which we should love God. “if we love someone,” he said, “we always remember them; we try to please them. Day and night our heart is concerned with the subject. Is that the way you gentlemen love God? Do you turn to Him often? Do you always remember Him? Do you always pray to Him and fulfill His holy commandments?” They had to admit that they had not! “For our own good, and for our own fortune,” concluded the Elder, “let us at least promise ourselves that from this very minute we will try to love God more than anything and to fulfill His Holy Will!” Without any doubt this conversation was imprinted in the hearts of the listeners for the rest of their lives.”