Hymns from the Feast of the Meeting of the Lord in the Temple offer wonderful insights into the mystery who is Jesus Christ.   The Feast commemorates the events described in  Luke 2:22-40. 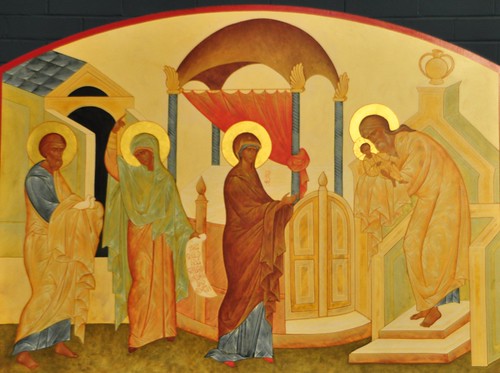 The basic narrative is that Jesus’ parents, Mary and Joseph, fulfilling Torah commandments, bring the 40 day old infant Jesus to the Temple in Jerusalem.  There they are met by the Righteous Elder Simeon who when he sees Jesus prophesies that this indeed is God’s Messiah.

Simeon, receive Him Whom Moses once beheld in darkness,
granting the Law on Sinai,
now that He has become a Babe subject to the Law!
This is He Who spoke through the Law.
This is He, of Whom the Prophets spoke,
Who, for our sakes, has taken flesh and has saved man.
Let us worship Him! 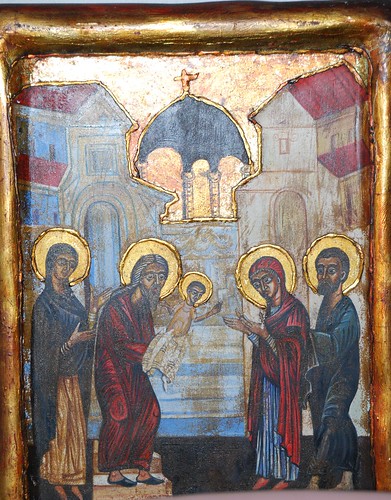 The above hymn teaches the truth held by Orthodoxy that the encounters with God which Old Testament saints had were in fact encounters with the pre-incarnate Christ.  So Simeon recieves in his arm the infant Christ, but it is the same Christ, who as God gave Moses the stone tablets of the 10 Commandments.  Both Moses and Simeon receive in their arms the Word of God!  Moses receives the Law from the Word, and Simeon receives the Word as a baby.   He who gave the Torah to Moses, namely Christ, which defined righteous behavior in the temple, will enter the Temple as a baby subject to the Law!  This is the great mystery of the incarnation of God.  Christ spoke about His incarnation.

They hymn playfully celebrates the mystery of the incarnation – Christ is He who spoke through the Law centuries before He was born.  Christ is the one of whom the prophets spoke.    The Old Testament is the history of a people being prepared for the coming of their Messiah.

Today Simeon takes in his arms the Lord of Glory,
Whom Moses saw of old in the darkness
when he received the Tablets of the Law on Mount Sinai.
This is He Who speaks through the Prophets
and Who is the Creator of the Law.
This is He Whom David announced;
He is fearful to all, yet great and abundant in mercy.

The above hymn presents Christ – a 40 day old baby in the Gospel who is also the Lord of Glory who Moses encountered when he received the Law on Mount Sinai.  Christ as the Second Person of the Holy Trinity speaks through the Torah and the prophets centuries before He is born, and these prophets are speaking of His birth which occurs centuries after they spoke or wrote.

The Ancient of Days, as a Child in the flesh,
is brought by His Mother, the Virgin, into the Holy Temple,
fulfilling the promise announced by His own Law.
Receiving Him, Simeon said:
“Now let your servant depart in peace, according to Your word,
for my eyes have seen your salvation, O Lord!”

It is Christ who is identified as being the “Ancient of Days” from the prophecy of Daniel 7.  The mystery of the incarnation means Christ is both the Ancient of days as well as the one like the Son of Man who Daniel mentions.   The Feast of the Meeting of the Lord sees the prophesies being fulfilled in Christ who is the incarnate God.

May we all be enlightened by the Feast! 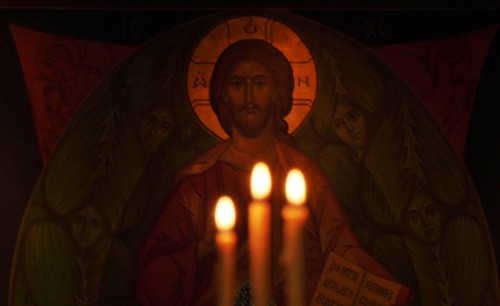