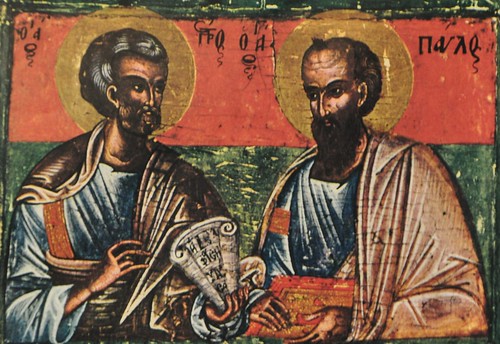 Celebrating the Feast of the Holy Glorious Leaders of the Apostles Peter and Paul on June 29 is an ancient practice of the Church.  It was already celebrated in the Pre-Constantinian Church.  As such it actually predates some of the Twelve Major Feasts of the Church.

“This feast was instituted by Sixtus II (Pope from 257 to 258) on 29 June of 258, when the relics of these two great apostles were translated to the catacomb of St. Sebastian in Rome. The Gospel reading for the Liturgy of the day is Matt. 16:13-19: St. Peter’s confession of Christ at Caesarea Philippi.” (footnote, Saint Gregory Palamas, The Homilies, p 584) 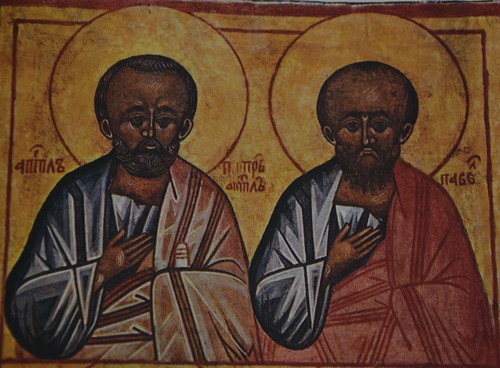 In the modern world, some scholars who reinterpret Christian history in order to discredit some of the theological claims of the Church, try to portray some of the theology of St. Paul as late developments in Christian thinking.  They discredit St. Paul, claiming he invented a Christianity that didn’t exist prior to his teaching, and that it was Paul and his followers who turn Jesus from a messianic rabbi into the incarnate God.  NEW YORK TIMES columnist Ross Douthat points out that history itself does not support this revisionist version of understanding Christianity.

“In other words, the popular revisionist conceit that the early Christians initially meditated on Jesus’ sayings and only gradually mythologized their way toward the idea of his divinity finds no support whatsoever in the oldest surviving stratum of Christian writing. As Adam Gopnik, no believer himself, put it in a New Yorker essay: ‘If one thing seems clear from all the scholarship … it’s that Paul’s divine Christ came first, and Jesus the wise rabbi came later. This fixed, steady twoness at the heart of the Christian story can’t be wished away by liberal hope…Its intractability is part of the intoxication of belief.’” ( Bad Religion, p 165)

St. Paul doesn’t invent Christianity or distort it as some Muslims claim, as do some modern liberal biblical scholars.  St. Paul received a tradition and proclaimed it to the world, while the other Apostles were still alive.  There was opportunity for them to quash his teachings, but instead the Church embraced Paul and recognized him as one of the glorious leaders of the Apostles.  Paul didn’t change the theology or the message, he just proclaimed it more loudly and to new people.